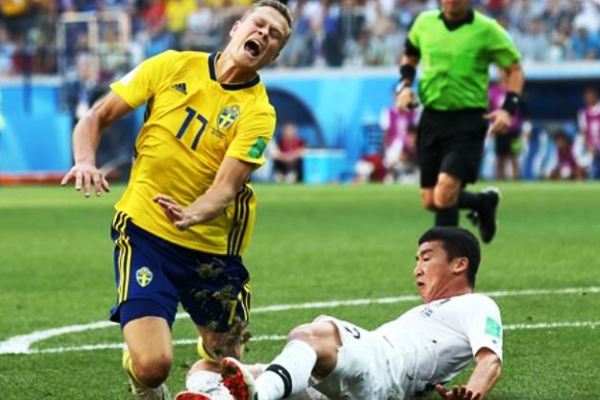 Video Assistant Referee technology’s continuing to play a part at the World Cup in Russia.

Sweden beat South Korea 1-0 in today’s opening game thanks to a penalty from captain Andreas Granqvist that was awarded after a video assistant referee (VAR) review.

There was a short delay for Kim Min-woo’s foul on Viktor Claesson to be analysed on video and for the referee to point to the spot before Granqvist sent goalkeeper Cho Hyun-woo the wrong way.

Sweden, who join Mexico at the top of Group F on three points, created the better chances in Nizhny Novgorod.

Marcus Berg should have scored midway through the first half but his close range shot was beaten away by Cho, while South Korea did not manage a single shot on target.

Even in possession, but #SWE create more chances in Nizhny Novgorod and grab the goal to win the game…#SWEKOR pic.twitter.com/oO1OLPucK9

They join #MEX on three points in Group F after today's result against #KOR#WorldCup pic.twitter.com/K4EQFaRY7F

Too Late For Ireland But Petit Admits Henry Handball Shame

McIlroy In Strong Form Seeking Green Jacket At The Masters