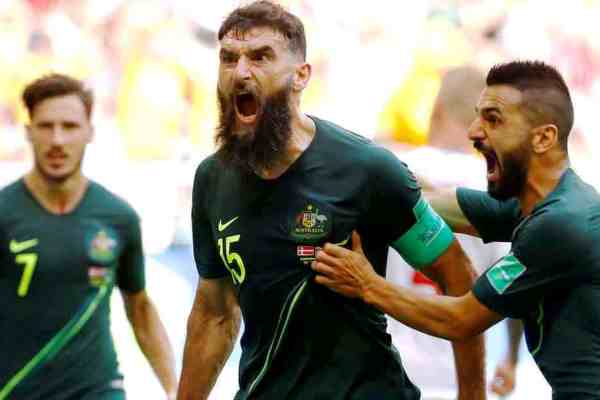 Australia’s World Cup hopes still have a pulse, with another contentious penalty using VAR technology earning the Socceroos a 1-1 draw in Group C against Denmark. Both sides can still advance into the knockout stages with one game remaining but it was VAR which once again took centre stage at the Samara Arena.

The Danes star man Christian Eriksen of Tottenham struck a beautiful opener for the Danes after just seven minutes but they failed to build upon that in today’s stalemate in Samara. Nicolai Jorgensen also came close for the Scandanavians but they toiled as the match wore on.

Then the well organised Australians benefitted from a VAR decision on 38 minutes. The video assistant referee took a look at a handball claim against Yussuf Poulsen. Antonio Mateu Lahoz had originally waved away Australian protests, but then briefly left the field to consult the VAR monitor and decided to award a penalty.

Australia were the wrong side of history in their first game against France as a penalty was awarded for the first time in a World Cup match since VAR was introduced.

However despite the ball seemingly hitting Poulsen’s arm by accident from a header, Spanish official Lahoz pointed to the spot for grizley bearded skipper Mile Jedinak to level from the spot to ultimately secure a draw and keep their fight alive, but only just.

That signified the end of Kasper Schmeichel’s record run of nine hours and 31 minutes without conceding at international level for the Danes. It also means that Australia’s last five goals in competitive games have come from Jedinak penalties.

Schmeichel had to then come to the rescue with two late, great saves. He first denied substitute Daniel Arzani, the youngest player in the tournament at 17, who looked dangerous, and seconds later he thwarted Mathew Leckie.

That was the last meaningful action of the contest, with both nations having to settle for a share of the spoils which maintains their respective hopes of making it out of Group C and into the knockout stages.

A first point of the 2018 #WorldCup for the @Socceroos, while @dbulandshold maintain their unbeaten run in Group C…#DENAUS pic.twitter.com/iVhv0ok4aS

“My players looked tired. You could see them tiring as the match went on. We tried to get our substitutes on to inject some energy but our game was restless. We lost the ball too often, faced too many counter-attacks and had to do too much running. We used up a lot of strength. But that’s the World Cup – it’s very tough and that’s just the way it is. Australia are a good side, well organised, and France were lucky to beat them 2-1. So we knew it was going to be tough. The level of effort from my team was good. We just gave the ball away too often and made too many wrong choices.”

as was Bert van Marwijk the Australia coach:

“I feel we should have won. It’s like against France: I’m disappointed and proud, and feel we deserved more. I honestly think we’ve deserved four points from these two games. So I’m very disappointed. It is just the last piece of the puzzle we are missing. Now we must concentrate on Peru; the rest, in terms of whether we can qualify, we cannot influence.”

Leinster Hope To ‘Basque’ In Glory