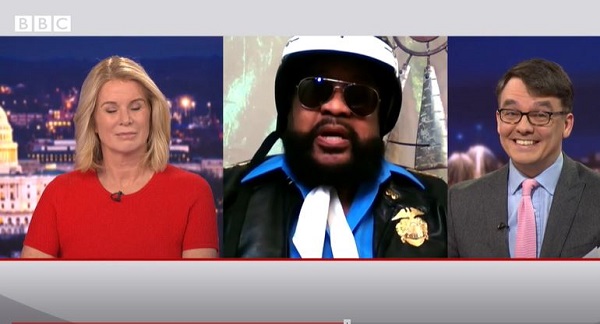 Victor Willis gave an interview to the BBC about the group’s music being used at Trump’s rallies.

The lead singer of the disco group reveals to BBC World News America that he does not endorse Mr Trump. He states that the band has even asked the president to stop playing their music.

Willis likes sharing music and says he loves that all people, including Democrats and Republicans, like YMCA. He sees no problem in people enjoying their music and notes YMCA has risen to #14 in the Billboard Chart.

But the 69 year-old distances himself away from endorsing the current president of the United States.

“I don’t endorse Trump. I’ve never endorsed Trump, nor has The Village People,” he said.

The singer declares they have been asking the campaign to stop playing their songs, Macho Man has also been used.

“[…] due to copyright laws in the US, he’s able to use our music because it is not being used in an incorrect way.”

Although, this will not stop Trump’s campaign from using the tracks. According to an article by Pitchfork, Trump can use the music if he chooses to do so.

Performers have little control over who plays their music in public. They state this under the byzantine rules for music copyright in the US. Political campaigns can acquire licenses for vast troves of music through performing rights organizations ASCAP and BMI. Bars and restaurants use similar ways to play music at their establishments. A BMI spokesperson confirms this in a statement to Pitchfork. The Trump campaign has a “political entities license,” authorising it to use more than 15 million songs.

Although, the special licenses for political campaigns include a provision that allows certain songs to be excluded if the artists object to their use.

Many Artists Would Like Trump To Stop Using Their Music

Like all electees, Trump uses plenty of music on his campaign trail. Although, there are plenty of other musicians who all object to their music being played at Trump’s events. Phil Collins has sent a Cease and Desist Order to Mr Trump. Neil Young, Dexy’s Midnight Runners, Panic! at the Disco’s Brendon Urie, and the estate of Tom Petty are most recent. The list also includes R.E.M., Guns N’ Roses, Queen, Ozzy Osbourne, Earth, Wind & Fire, Prince’s estate, as well as Adele and Pharrell. Bruce Springsteen even threatens to move country, if Trump is re-elected.