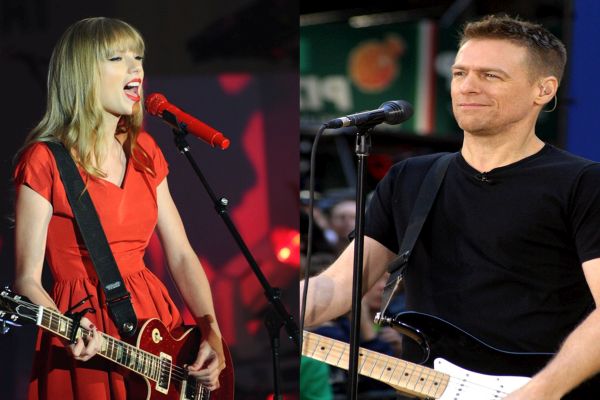 Taylor Swift played “one of [her] favourite songs ever written,” with none other than the legend who made the tune famous, Bryan Adams. The Canadian rocker joined Swift onstage over the weekend in Toronto to perform “Summer of ’69,” for the pop star’s Reputation Tour. The video of the live duet is available below.

After telling the crowd about her love for the 1984 classic rock anthem, Swift began a solo version of the song’s first verse when Adams appeared without warning on the stage’s elevator. The two singers then dueted on an energetic rendition of the single that comprised of an extended part where Adams and Swift swapped improvised vocals. Check out the video.

Swift had previously performed an acoustic “Summer of ’69” on dates previous during her Speak Now Tour back in 2011. Similar to Swift’s 1989 trek, the widely received Reputation Tour has frequently welcomed special guests onstage. During Swift’s London concerts in June, Swift brought out Niall Horan to perform ‘Slow Hands’ and Robbie Williams who blasted his hit pop anthem Angels. During her North American leg guests such as Troye Sivan, Shawn Mendes, Selena Gomez, Hayley Kiyoko and, nearly every night, the openers Charli XCX and Camila Cabello guested on “Shake It Off.”

Adams took residency in the 3Arena on Monday and Tuesday, May 21st and 22nd lastand we cannot believe the show he put on. The rocker covered The Crickets’ I Fought The Law and Thin Lizzy’s Whiskey In The Jar much to fan’s delight before finishing on All For Love. You can read more about that here.

Meanwhile Taylor Swift  has had her home broken into three times in recent months. A  man was arrested attempting to climb the wall of Taylor Swift’s mansion located in Beverly Hills. The trespasser did so while screaming the singer’s name. Earlier this year another man wearing a mask and rubber gloves and armed with a knife, a rope, and live rounds of ammunition was arrested outside that same Beverly hills property. And a third man was also arrested for breaking into one of the singer’s homes.

Stereogum’s Peter Helman had this sage advice to any future would be trespassers, ‘Here’s a free public service announcement: Don’t break into Taylor Swift’s house. It’s creepy and bad and you’ll get arrested. Just don’t do it.’

ELTON JOHN TO COLLABORATE WITH GORILLAZ FOR NEW ALBUM