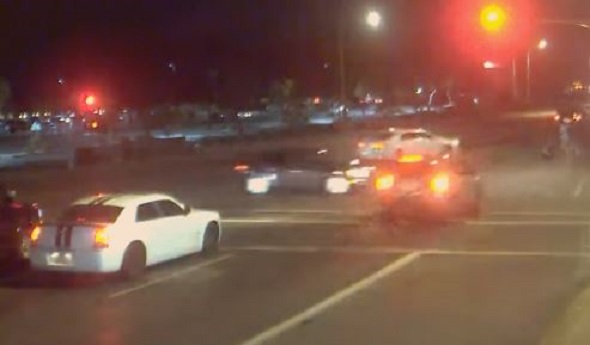 In the States, a car crash seems to have saved the lives of a young family in Phoenix, Arizona. That’s after it diverted a driver who had driven through a red light.

CCTV reveals the moment a Jeep sped past parked cars at a crossing and directly towards a couple who were walking across the road with a pushchair.

Luckily for the pedestrians, the Jeep drove into the path with another vehicle, a Chevrolet Cruz which arrived just in the nick of time. In a statement, the Arizona Police Dept said that:

“A hero in the form of a Chevy Cruz may have saved the lives of a couple pushing a stroller through a Phoenix crosswalk.

The people were trying to cross Indian School at 53rd Avenue late in the evening when a car came barreling through the red light.

A Chevrolet Cruz on 53rd Avenue entered the intersection on a green light when a Jeep driven by Ernesto Otanez Oveso slammed into that car, just a few feet away from the pedestrians.” Everyone survived with minor injuries.