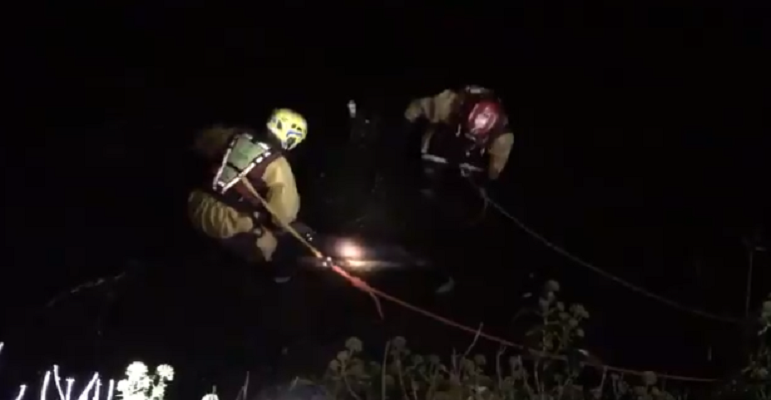 While Cork fire Brigade may be more used to working on land, the city’s responders were called out last night to come to the assistance of a distressed dolphin.

The dolphin had swum up the River Lee and become trapped by branches. It was seen in trouble to the rear of Deanshall apartment complex on Wandesford Quay by a passer-by around 11pm last night.

Cork’s first responders took to Twitter. “No such thing as an ordinary day in this job! Last night crews from Anglesea St responded to an animal rescue incident in the Lee. A distressed dolphin that was trapped by branches was successfully rescued by firefighters before heading safely on its way. ”

No such thing as an ordinary day in this job!

Last night crews from Anglesea St responded to an animal rescue incident in the Lee.

A distressed dolphin that was trapped by branches was sucessfully rescued by firefighters before heading safely on its way. 🐬🚒 🚨#notjustfires pic.twitter.com/k0goJgipOw

Rescue crews from Anglesea St responded to the call and managed to successfully liberate the dolphin, who headed safely away on its merry way. As the crew members said themselves, the fire brigade isn’t just for fires!

There has been quite a lot of animal activity in Cork recently. locals claim to have witnessed six sightings of a wild puma last week around the Fountainstown and Crosshaven area. According to reports, there has been a significant increase in the number of hen attacks, startled horses, and a drop in the number of foxes in the area.

Although the reports have yet to be confirmed, Vincent Cashman from The Cork Society of Prevention of Cruelty to Animals is confident that the rumors may be factual. Traps and cameras have been set up in order to locate the animal, which is predicted to be 10 stone and 8 feet in length.

Mr Cashman delivered a statement on the Neil Prendeville show on Red FM, warning: “This is a large cat – and if they are cornered- they are dangerous… or if they are frightened. We wouldn’t be recommending people go out looking for it. We have traps out since this started two weeks ago. We also have motion sensor cameras.” You can read more about that story here.