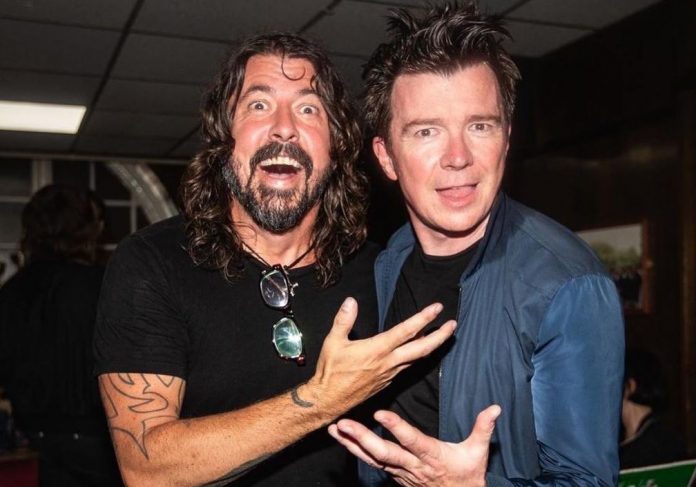 Dave Grohl made an unexpected appearance at a London Club last week. According to spin.com Grohl crashed the club NME party at the Hackney Moth Club.

The Foos frontman surprised the crowd by singing a duet with Rick Astley of the hit “Never Gonna Give You Up” as well as a few Foo Fighters classics.

The performance of his cover of Astley’s hit song has been given the “Rickrolling “ meme credential. Grohl performed Astley’s classic hit on guitar with Astley on the drum kit. They were well into the jam before the iconic pop star joined Grohl at the mic.

The crowd were treated to a memorable performance from the pair with nearly every one of the assembled crowd holding up their phones to record them in action, which is evident by all the videos shared across social media.

Grohl pleased the crowd by knowing every single word of Astley’s hit song and they went wild when Astley took the mic. Grohl, speaking to the crowd said “ I don’t know much about Club NME, but I know you’re not gonna see this anywhere else.”

Here’s a few more pics from an epic Friday night in London with Dave Grohl and Rami of the @FooFighters #foofighters 🤘 pic.twitter.com/ldgv8yRc3W

Me: What would a duet between Dave Grohl and Rick Astley look like?

Judging by the video, Dave Grohl and Rick Astley both had a fantastic time and it’s not the first time Astley and Grohl shared the stage

They have been friends since meeting at Japan’s Summer Sonic Festival in 2017. They have been remembered for Rickrolling the crowd when the Foo Fighters started to play “Smells Like Teen Spirit” and switched over to “Never Gonna Give You Up” and Astley came out to join them at the mic.

Back in 2015 the Foo Fighters played Astley’s song to Rickroll the Westboro Baptist Church, you could say they’ve been making a career out of it ever since.

Genesis Reunion In The Air?