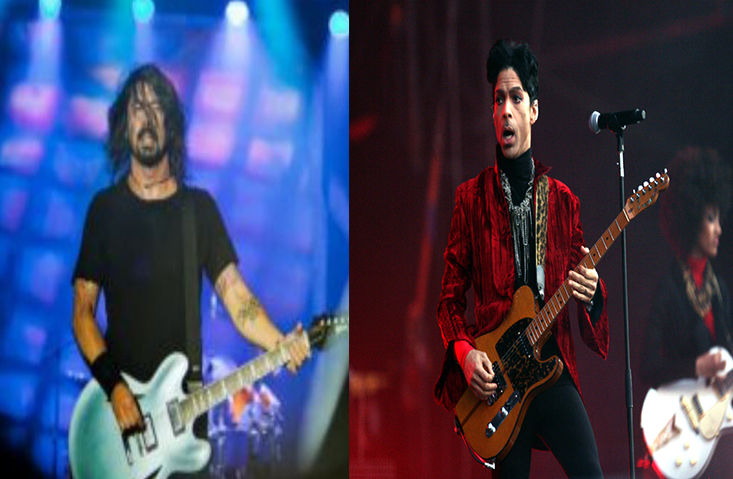 Dave Grohl recalled on Last Week’s  Jimmy Kimmel Live how he once jammed with Prince, one of his personal musical heroes and no one was there to see it!. The two musicians met back in May 2011, during Prince’s 21-night concert residency at the Forum in Los Angeles, California.

According to Rolling Stone, Grohl explained, “Me and like 20 of my friends got a party bus and went down to the Forum, so we were hammered when we got there. Prince wanted to meet Grohl and bring him onstage for a jam, but the Foo Fighters frontman was too inebriated to play live. “Afterwards we met, and I said, ‘When do you want to jam, man? And he said, ‘How about Friday?’ I said, ‘OK.’ He said, ‘I’ll call you.’ So I waited all week with my phone, like, ‘Prince is gonna call! Prince is gonna call!’ And of course, he never called. Someone said, ‘Just go down there.’ And I got down there to soundcheck, and there was no one there – it was an empty room. I walked out into the middle of the arena, and he sees me and goes, ‘What are you doing here?’ And I said, ‘Oh, I thought we were gonna…jam, Prince?’”

Grohl explained he then got behind the drums, and they jammed on Led Zeppelin’s classic “Whole Lotta Love”. For Grohl it was a moment he will never forget “It was, I swear to God, the most amazing experience of my entire life, and there was nobody there, The Forum was completely empty.”

Meanwhile, At a Foo Fighters show last week, Taylor Hawkins was under pressure from screaming fans to get his kit off on stage. So he did. Luckily for all concerned, the epic drummer was wearing pants when he took of his shorts and threw them into the crowd. You can watch the revealing moment below as Dave Grohl looked on from behind the drum kit.

Foo Fighters banned quite a strange list of items from their Wrigley Field shows in Seattle. Usually, promoters release a comprehensive list of what is and isn’t allowed at gigs and the Foos wanted to make sure everyone had an incident-free evening.

As well as the usual banned weapons, bottles and coolers, the band had security first when they prohibited

– Any pencil that isn’t a number two pencil

A Good Friday Indeed – Bagatelle Are Making Their Way To...