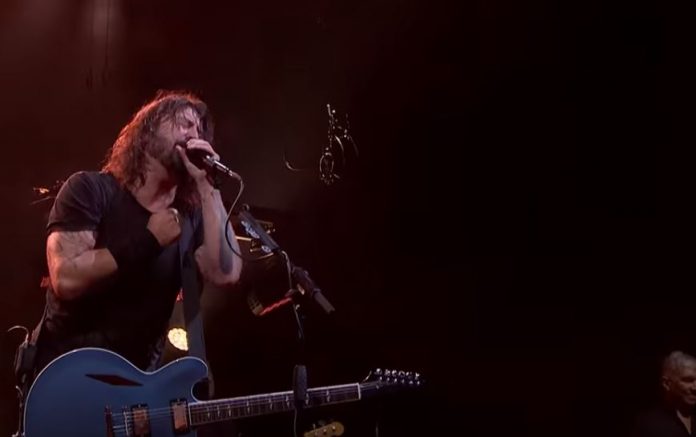 Video has emerged of the moment that one fan managed to climb the speaker tower during Foo Fighters‘ headline set at Reading 2019 last week.

According to the NME, the band played a stellar closing set at Reading on Sunday, their rendition of ‘Monkey Wrench’ saw one fan climb to the top of one of the speaker towers before they set off a flare.

watching foo fighters at reading festival and a guy has climbed to the very TOP of a speaker structure in the crowd! mad man – security are baffled 😂🤟🏻 @foofighters @OfficialRandL #readingandleeds #readingandleedsfestival #randl #randl2019 pic.twitter.com/GOE5VUhn1U

Meanwhile, Dave Grohl has put the record straight denying any of the rumours that he is making a guest appearance on the Queens Of The Stone Age’s next studio album.

According to Antimusic, the rumour started after ZZ Top icon Billy Gibbons spoke to Eonmusic, “Just one month ago, I was making a record with Queens Of The Stone Age. Dave Grohl was also taking part.”

When Grohl was quizzed about the comment by the NME, he quickly set the record straight and said that himself and QOTSA’s Josh Homme have just been hanging out together, simple as that.

Dave continued to explain: “I’m not on the new Queens record. You know what Josh and I have been doing together? Riding motorcycles and eating waffles. That’s it. Let me tell you, it’s a fun morning. We’ve done it more than a few times and it’s pretty f***ing great.”

Grohl concluded that he would love to appear on the new QOSA record:

“I wish I was on the new Queens album. I f***ing love playing with Josh. He’s one of my best friends, but at the moment, it’s just motorcycles and waffles.”

Unreleased Bowie Recordings To Feature On ‘The Mercury Demos’

Liam Gallagher Breaks Silence On The Future Of Oasis