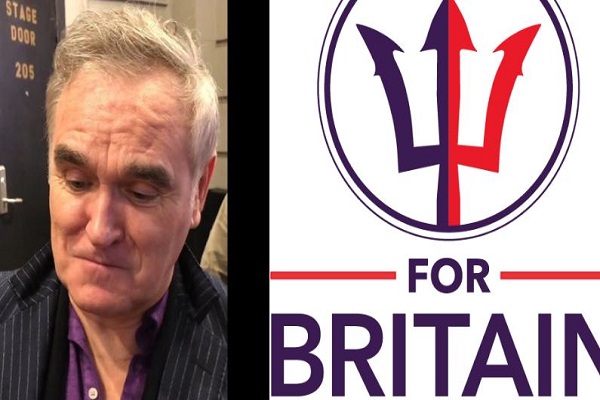 Last year, during an interview on Morrissey’s own website the ever controversial lead singer of the Smiths came out in support of For Britain. The group are an extremist-fringe right-wing political party in the UK.

Mozza continued to set the interwebs alight when he was spotted wearing a For Britain badge a few weeks ago during his New York residency. Then, last week when making an appearance on the Tonight Show, Morrissey wore a small For Britain pin.

Now, the far right organisation’s founder of For Britain, activist and anti-Muslim, Anne Marie Waters has thanked Morrissey in a YouTube video. The politician said in the clip:

“Thank you so much for your support since the UKIP leadership election. Thank you for giving us so much publicity. I can tell you that the traffic to our website exploded with the story breaking of you wearing the For Britain button badge, which you have been wearing everywhere from what I can see…”

Waters continued: “We have sold out of those, but the good news is we have more, and they have been selling like hot cakes, so thank you very much for doing that.”

Waters also thanked the Daily Mail for covering the story which by default had encouraged and motivated a lot of support for the party. She continued on the video to say:

“We’ve grown in membership, products have been selling, and website traffic is huge. Thank you, Morrissey. I hope to meet you one day. Thank you, Daily Mail. Keep up the hysterical smearing. It’s having the opposite effect. You are driving people to us. Thanks.”

For Britain was founded by Waters in 2017, she had previously run for leadership of  UKIP and lost. Nigel Farage the leader of the Brexit party who had formerly led the UKIP party had once described Waters’ supporters as “Nazis and racists.”