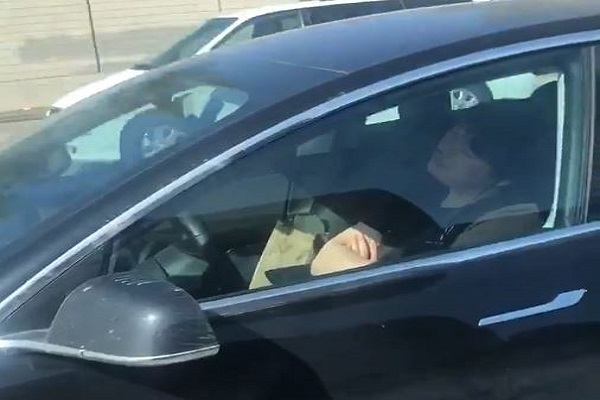 A video which reveals a Tesla driver asleep at the wheel of his moving car on auto-pilot has raised alarm bells. The video was filmed in Los Angeles at the busy interstate 5 last Saturday morning.

The clip, shared on Twitter by US journalist Clint Olivier, was captured by his wife Alisha.  As Mr Oliver passes the car, which is in motion in the middle lane, the journalist can be heard saying: “He’s totally asleep. This is crazy.”

As the footage comes to an end, the driver seems to become alert and grab the wheel of the car. Tesla’s auto-pilot feature permits cars to autonomously steer, accelerate and brake automatically in a single lane.

However, the company maintain that the feature still needs “active driver supervision” and insist do not make the car autonomous.

@RalphNader Ralph can you do anything about stopping this disturbing phenomenon? My wife and I shot this video last week on the busy I-5 in LA. @Tesla #sleepingdrivers #unsafeatanyspeed pic.twitter.com/ADbpt0uSZ4

Breaking News reports via AP that at present there is no exact law in California about snoozing while in the driver’s seat of a self-driving vehicle. However, authorities have powers to make sure that drivers are not endangering the safety of themselves and others.

Just last year, UK driver Bhavesh Patel, 39, from Nottingham, was last year banned from the road for over a year when he was filmed in the driver’s seat of his Tesla S 60. The driver had his hands behind his head on the northbound carriageway of the M1.

Such incidents like these and a number of serious crashes have raised questions over the legal status of autonomous driving. Tesla and other m of automated cars such as Google insist that the technology will greatly reduce the number of crashes on roads.

Campaign To Raise Awareness of the Scourge of Knife Crime in...