Metallica opened Northern California’s newest entertainment arena and at the same celebrated the 20th anniversary of their S&M record. That was with an epic show at the Chase Center in San Francisco last night. 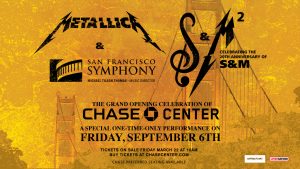 Titled S&M2, the performance saw the infamous metallers team up with the San Francisco Symphony Orchestra. As well as reviving a number of songs from the original S&M performance, the band also premiered brand new orchestral arrangements on some of Metallica’s more recent releases.

The night started with the symphony performing Metallica’s traditional pre-show number, Ennio Morricone’s “The Ecstasy of Gold,” before the rockers joined the orchestra onstage for the Ride the Lightning instrumental rendition of “The Call of Ktulu.”

The symphony’s bassist, Scott Pingel, also treated the audience to a distorted upright bass version of “(Anesthesia) Pulling Teeth” in tribute to Cliff Burton.  Hetfield paid tribute to his departed bandmate, “He would have loved to be here, I know he’s here in spirit.”

The band and orchestra also joined forces for a cover of a classical piece, Alexander Mosolov’s “Iron Foundry.”