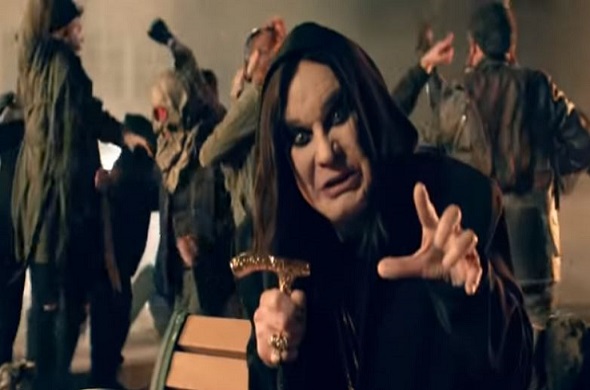 Ozzy Osbourne has just released the official music video for the song “Straight to Hell.” The release comes amid speculation over Ozzy’s health.

In the video, you see Osbourne seated and holding a cane amongst a crowd demonstration and authorities wearing riot gear.

It is not really clear what exactly the crowd are protesting about and the only clues are a number of signs reading “The devil is my best friend,” as well as, “Better than yours,” “Stop premature Christmas decorating” and “I’m grounded for life.” But who cares…it’s Ozzy!

According to UCR, Molotov cocktails and smoke bombs were thrown and one guy stripped naked as the violence spread from day into night. The song “ Straight to Hell” was first released online in November and the track features Guns N’ Roses guitarist Slash.

This is the second single from Osbourne’s upcoming album, Ordinary Man. The other musicians that feature on the LP include Duff McKagan and Red Hot Chili Peppers drummer Chad Smith. Graveyard.”

Ordinary Man which is due out later this year will be the first solo release from the Prince of Darkness since 2010’s Scream. “The album was all finished in four weeks,” Osbourne revealed,

“I said to [wife and manager] Sharon that I didn’t feel like I’d made an album, because we haven’t ended up screaming at each other.”

Osbourne recorded the record while recovering from a serious fall. “If it wasn’t for making this record, I would still be on traction, thinking, ‘I’m going to be lying here forever.”

Osbourne said, “I’ve missed music so badly. My fans are so loyal and so good. Up until making the album, I thought I was dying. But that got me off my arse. … It’s the greatest album I’ve done.”

Now recovered, Osbourne is ready to return to touring. The rocker’s No More Tours 2 will resume on May 27, with Marilyn Manson lined up as the opening act.

The Eagles And Fleetwood Mac Are Joining Forces For U.S Bi-Coastal...