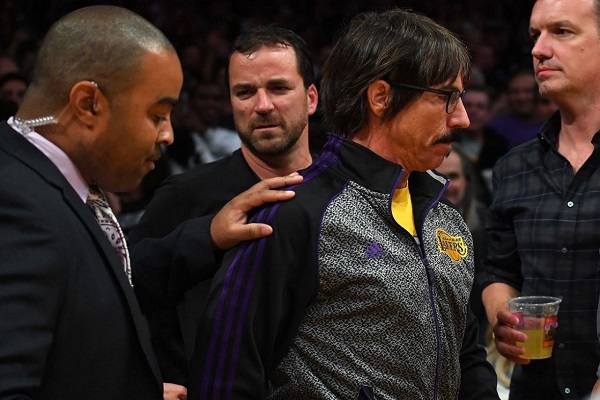 Anthony Kiedis, lead singer with Red Hot Chili Peppers, found himself evicted from a basketball game with the LA Lakers over the weekend. That’s after an incident broke out with the staff and players of the opposition.

Kiedis was ejected from the game on October 21 after reportedly shouting expletives at a member of the Rockets team, Chris Paul. The NME reports that Kiedis flipped the middle finger at Paul moments before he was taken out of the stadium.

The incident came after a brawl between the two teams which culminated in three players being suspended. You can check out a clip of the incident below.

Anthony Kiedis got ejected from the Lakers game last night, and it looks like he was wearing a disguise pic.twitter.com/Oqd5DwRgk7

*Extremely Anthony Kiedis getting led out of the Lakers game voice*

I DON'T EVER WANT TO FEEL, LIKE I DID THAT DAY pic.twitter.com/ABIpnZRAFe

At the lakers game last night with my dear brother. It Got crazy at the end, but man I get so satisfied, deeply drinking in the depth and beauty of the game. People operating at a high level in so many dimensions. Cerebral, physical, spiritual, emotional, unspoken and telepathic communication. I truly love basketball with my ❤️❤️❤️ this photo by my brethren @atibaphoto