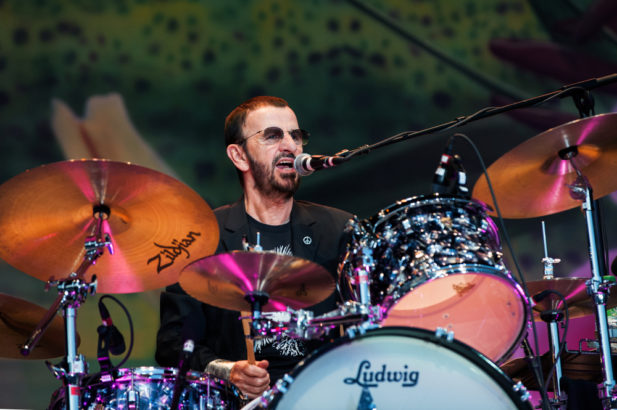 Ringo and his All Starr band rocked New York City last week. As always, the former Beatle was joined by his famous music mates. There’s excellent fan footage below.

Since 1989, Ringo Starr has been enlisting groups of famous friends to join his All-Starr Band. Rocking around the world, the band play a selection of Ringo’s, The Beatles’ and their own hits. Bruce Springsteen, Todd Rundgren, Joe Walsh, and John Entwistle have all added their talents.

“Man, I’m excited,” Ringo announces after instigating the night with a cover of Carl Perkins’ ‘Matchbox’ and a rendition of his 1971 track ‘It Don’t Come Easy’. Loving his enthused audience, Starr calls out “I see you, brother” at audience members in T-shrts with his face on them. When anyone screams out “I love you, Ringo” he breaks into a cheesy grin right back at them.

“There was only ever one song written by Lennon, McCartney, and Starkey. I know, I know – it should have been the other way.” as he introduces the first Beatles song of the night, ‘Rubber Soul”s ‘What Goes On’ follows as Ringo sways around a small patch of centre stage. Once it’s finished, he races up to the vacant drum kit behind him and turns things over to his band.

The night was made up of classic good time songs mixed with Beatles tunes. Ringo Starr introduces ‘Yellow Submarine’ by playing a joke on the crowd. “If you don’t know this one you’re probably in the wrong venue and you’re probably waiting for the Rolling Stones,” the band then launch into ‘(I Can’t Get No) Satisfaction’.

Then he points out a seat near the front of the crowd and waves. “Hi Mick! We’ve got Mick in tonight.” Everyone starts searching for the spot to see the singer as Ringo looks on grinning, watching the looks on his crowds’ faces until he announces, “Mick Jagger isn’t present tonight”.

Happy with his joke and a rousing ‘Yellow Submarine’ done, he leaves the stage to let his band deliver “two magical, musical moments” – 10cc’s ‘I’m Not In Love’ and Santana’s ‘Black Magic Woman/Gypsy Queen’. “I could go home now, I’m full of love, and joy, and peace,” he says when he returns.

Finishing ‘With A Little Help From My Friends’ Ringo says, “I wanna thank you all for being a great audience. I love it and I love you. Peace and love – it’s the only way.” He dashes off into the wings as the band segues into a blast of John Lennon and Yoko Ono’s ‘Give Peace A Chance’.

Kurt Cobain Talk About His Struggles With Record Label In New...