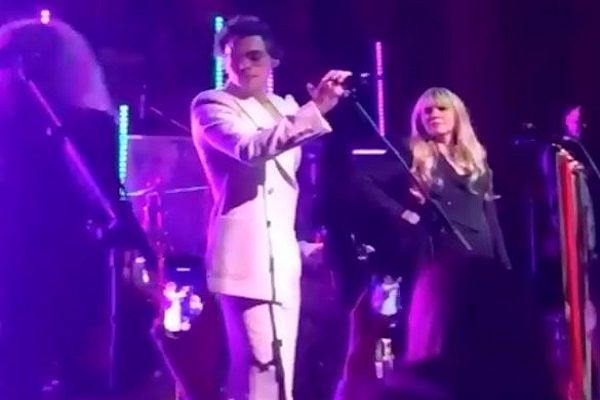 Stevie Nicks was inducted by Harry Styles into the Rock & Roll Hall Of Fame at the Barclays Centre on March 29th. The pair were performing together at the 2019 Induction Ceremony that took place in New York.

The positive feedback that the performance received, has suggested Styles and Nicks could take this show on the road.

Just this week, Styles, solo artist and former member of the band One Direction and Nicks singer of Fleetwood Mac fame performed that RRHOF induction ceremony collaboration as an encore at the Gucci Cruise 2020 Fashion Show.

That was at the Capitoline Museums, in Rome for the afterparty as Styles has recently been named the face of Gucci’s new genderless fragrance campaign.

According to Rolling Stone, they performed the well known Fleetwood Mac tune “Landslide” and Nicks’ “Stop Dragging My Heart Around” to an audience that included stars such as Elton John, A$AP Rocky and Zoe Saldana.

you didn’t ask but here is stevie nicks and harry styles singing landslide together. have a good day. pic.twitter.com/e5IvM4WNYy