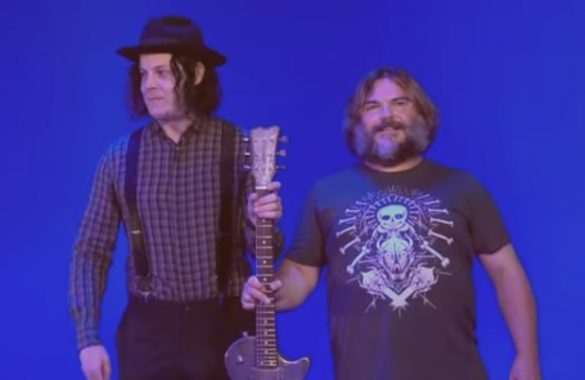 Last week, Nova reported that Jack Black had announced that Tenacious D had recently hit the studio to record a new track with Jack White.

Now via a YouTube vlog, dubbed “Jack Gray”, the Tenacious ones outline their collaborative encounter with White. After a visit to White’s Third Man Records offices, Black and fellow bandmate Kyle Gass moved on to White’s home studio:

“We’re heading over to Jack White’s house to record a single. Me and Gass have been working on a jam — it’s not quite done, but I think that’s where Jack White comes in and helps us pull it over the finish line. This is a legendary collaboration.”

CoS reports that cameras were banned the recording session as the rockers endeavoured to keep the jam a secret. Apart from revealing it was recorded on eight-track analogue tape, Tenacious D kept quiet about any further information regarding the new song.

The video also served as a document of Tenacious D’s show at Lollapalooza just passed.
In the video, Black and Gass also perform their own takes of The White Stripes’ “Seven Nation Army” and Michael Jackson’s “Black or White”. Check it out:

Chris Squire To Be Honoured With Award