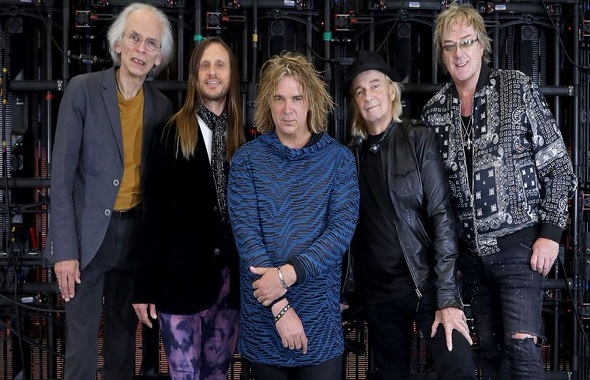 A lyric video from Yes of a previously unreleased 2010 song “To the Moment” has been shared.

According to UCR, it features along with other unheard songs, that include “Words on a Page,” “From the Turn of a Card” and “The Gift of Love,” all on a new three-disc box set ‘From a Page.’

It also contains an extended version of the 2010 live album, In the Present which was recorded the previous year in Lyon.

The studio tracks were recorded in 2010 and at that stage the Yes line-up was Steve Howe, Chris Squire, Alan White, Oliver Wakeman (son of Rick) and singer Benoit David.

To The Moment from YES – FROM A PAGE box set
Lyric video edited by Oliver Wakeman.https://t.co/Qk3bndtxIN pic.twitter.com/jp9nVr8ZyX

Howe and White are the only remaining band members joined by Geoff Downes, Billy Sherwood and Jon Davison.

The latest news on the release is positive and as quoted by Howe himself, “Good music never goes away or lays down to the commercial pressures that exist.”

All four tracks “Oliver’s compositions ‘To the Moment,’ ‘Words on a Page’ and “‘From the Turn of a Card’ are examples of profound musical expertise while ‘The Gift of Love’ quintessentially is Yes, and the collaboration of all the musicians gives the album a familiar edge with its own stand-alone uniqueness.

On a personal note, Wakeman, who oversaw the box set and produced this latest lyric video said, “Following Chris Squire’s passing, I felt that the new music we’d created, but not released, should be heard and not sit unfinished on a shelf,”

Wakeman added, “And with Steve, Alan and Benoit’s enthusiasm for the project, I am proud to know that this music will get to see the light of day and, hopefully, be enjoyed by Yes fans as a piece of previously hidden Yes history.”

The Cranberries Share Single ‘All Over Now’ For Anniversary Of Dolores...