Home Music Videos: U2 Return To Their Roots At Intimate New York Show! 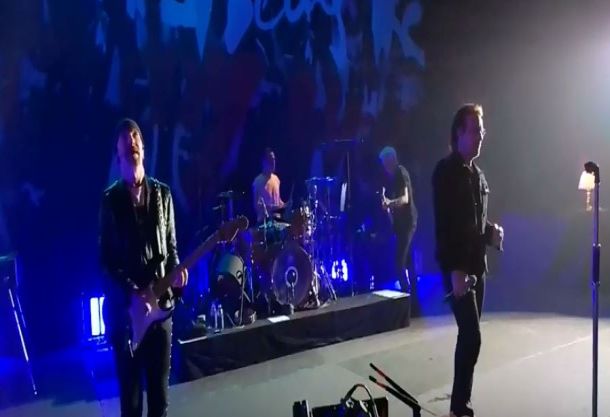 U2 played a stripped down performance at the famous Apollo Theater in New York City on June 11th. The latest show on the band’s Experience + Innocence tour was an invitation-only concert exclusively for SiriusXM subscribers. Videos from the epic show are streaming below…

According to Rolling Stone, the show at The Apollo offered a rare chance for fans to see U2 in intimate setting. That’s without the huge stage production of their arena and stadium shows. The band also mixed up the setlist for the rare event that Bono referred to as ‘a bucket list moment’ and ‘an incredible honor.’

The 18-song show kicked off with three consecutive songs from U2’s 1980 debut record, Boy, including ‘I Will Follow,’ ‘The Electric Co.’ and ‘Out of Control.’ Songs from 2017’s ‘Songs Of Experience’ and classic hits were played throughout the night, as well as 1984’s ‘Pride (In The Name Of Love)’, which paid homage to Martin Luther King on the 50th anniversary of his death.

After concluding the main set with ‘American Soul’, U2 were joined by the 13-piece Sun Ra Arkestra horn section for the first of a 4-song encore that included 1988’s Billie Holiday tribute, ;Angel Of Harlem’. The presence of the Sun Ra Arkestra elevating the show to another level.

They also played versions of “Desire”, a re-worked “When Love Comes to Town”, and a moving rendition of “Stuck In A Moment You Can’t Get Out Of” that they dedicated to the late chef and media personality Anthony Bourdain and others we’ve lost recently. Speaking to the crowd, Bono said, ‘It’s been a funny few years. We lost a lot of very inspiring, useful people and gained a few useless people.’