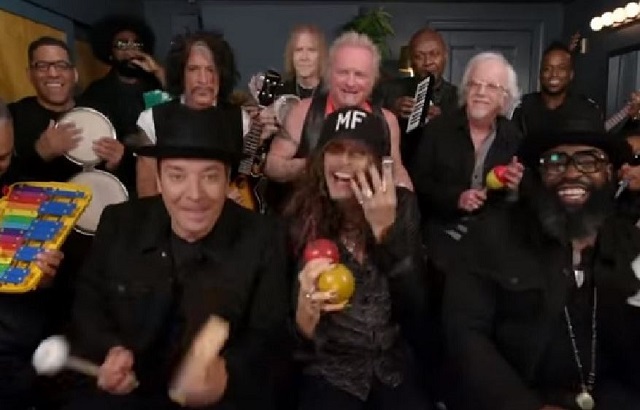 Following in the footsteps of Metallica and Fleetwood Mac, Aerosmith have performed ‘Walk This Way’ using only toy instruments.

Appearing on The Tonight Show with Jimmy Fallon, Aerosmith teamed up with the in-house band The Roots and the talk show host to blast out a classroom version of ‘Walk This Way’.

The excellent video witnesses all five members of the band contribute their vocal talents along with Steven Tyler. Tyler also displayed his apple shaker, orange shaker and harmonica talents with Joe Perry on ukulele. Tom Hamilton featured on tambourine, Joey Kramer on Fisher-Price drums and Brad Whitford playing the maracas.

Originally laid down in 1975 for their third studio album ‘Toys in the Attic’, the 1986 Run-DMC version of ‘Walk This Way’, which also featured Steven Tyler and Joe Perry, became an international hit.

Aerosmith ware set to play an 18-date residency at the Park Theatre in Las Vegas in April, June and July next year.