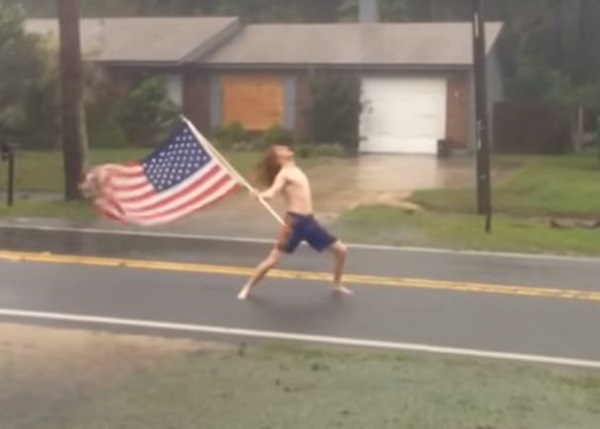 You may or may not remember a certain Lane Pittman? He made a name for himself back in 2016 when he took to the streets in the midst of Hurrican Matthew. Now he’s taken on Florence and video of the epic battle is below!

In 2016, the video footage of the rocker with an American flag in hand, braving the elements while Slayer’s “Raining Blood” played ensured his viral internet status as a hero and a nutbag! The moment transcended the metal community and united people across the globe.

As soon as Pittman discovered where Hurricane Florence would be making landfall last week, he began a Kickstarter for $150. The campaign’s description simply read, “Pay for my gas/coffee and I’ll go fight Hurricane Florence. ‘MERICA BABY!!! We stick together.” He presently has raised over $1,000.

The end product was another clip of viral gold! The Slayer fan tweeted the video, saying, “YOU ARE WEAK AND SMALL FLORENCE!!!!! FLORIDA MAN IS HERE!!!!!”

A FOX News reporter was also on the scene to capture the moment. Her caption read, “Me: What are you doing? There is flying debris. Half-naked man: I went viral a few years ago doing this.”

Me: what are you doing? There is flying debris
Half naked man: I went viral a few years ago doing this.#FlorenceHurricane2018 #viral #americanflag pic.twitter.com/6ofFVQswH1

I’m gonna grab me the tricolour down to me shorts and take on Helene! Yeah…Who’s with me!?

Freddie Mercury’s Life To Be Celebrated in New Graphic Novel