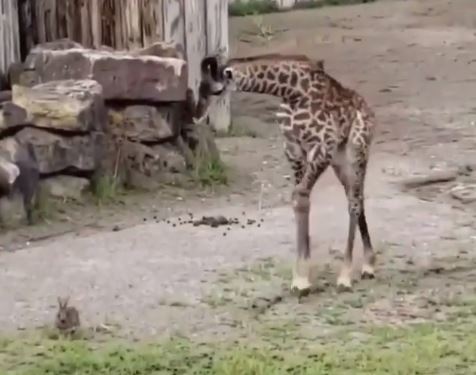 A wild bunny broke into the giraffe enclosure at Cincinnati Zoo And Botanical Garden.

The rabbit came face to face with baby Fennessy who stumbled across the hopping intruder.

In a video shared on Twitter, Fenn can be seen inquisitively having a gander the newcomer.

And as the rabbit high tails it out of the enclosure, Fenn chose to do a little bunnyhop of his own.

Staff at the zoo said it was probably the first time Fenn had ever seen a rabbit. Watch below as Fennessy came face to face with the young rabbit.

Somebunny has a new pal! Fenny the baby giraffe made a new friend!🐰🦒 pic.twitter.com/ECtUuuy42p