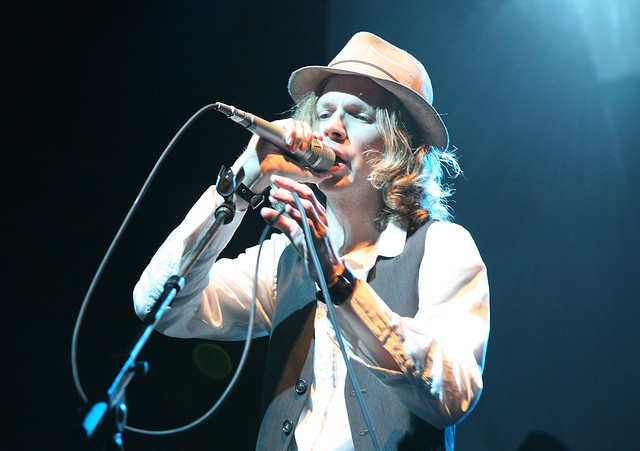 Beck has played a very special rendition of David Bowie’s track ‘Sound & Vision’. He was backed by a full orchestra for the cover of the song.

The video shows Beck performing the song surrounded by a 157-piece orchestra on a slowly rotating stage. The performance is actually from 2013, but the video has recently been unearthed in light of Bowie’s death.

Beck says to the crowd in the video “Everybody dizzy yet? There’s some sick bags under your chairs if you need it,”. It was an invitation-only audience of 280, who sat on floor cushions around the small, circular stage. The orchestra surrounded the audience around the outer circle.

Both Beck’s stage and the audience platform spun slowly in opposite directions as he performed a radically rearranged version of Bowie’s 1977 song. The start of the song is completely different to the original with an interplay between the different sections of the orchestra.

The large orchestra is actually conducted by Beck’s father David Campbell, who has worked as an arranger on landmark albums by artists ranging from Carole King to Metallica and Muse.

Speaking about the performance Beck said “It’s incredibly impractical putting everybody in a circle. Every musician is facing each other. It’s an audio nightmare. But the idea of the music surrounding the audience is what was interesting, and how you could play with the sound spatially.”

You can watch Beck perform a special cover of ‘Sound & Vision’ down below.