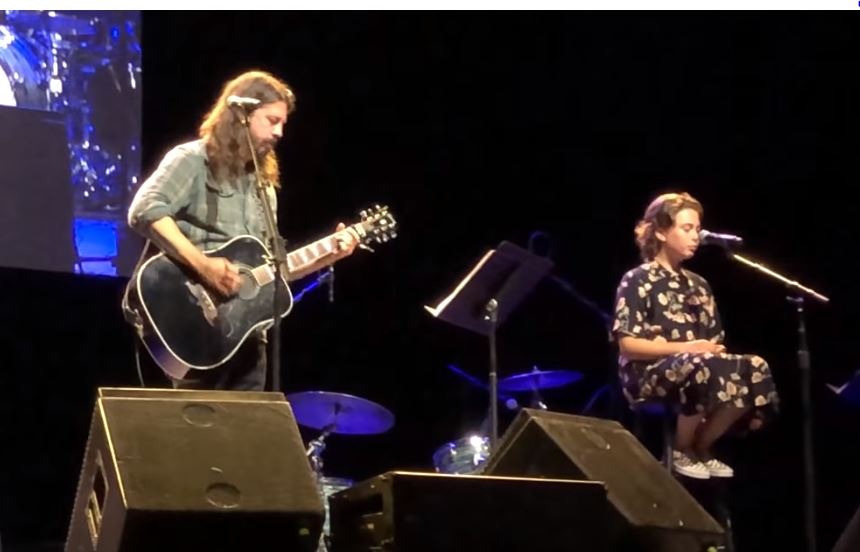 There’s no stopping Dave Grohl. His recent stage antics have been setting the interwebs ablaze of late. That’s thanks to the likes of the epic guitar shredding of Kiss Guy or Little Fonzie, who just wouldn’t back down when it was his turn to play the drums. Now, Grohl and his daughter Violet have shared a spine tingling cover of Adele’s ‘When We Were Young‘. There’s excellent fan footage of the rendition available below…

The moving father and daughter duet happened on Saturday night. The Foos frontman was headlining a benefit concert for the UCSF Benioff Children’s Hospital in San Francisco. Grohl had played acoustic versions of Foos classics including ‘My Hero’, ‘Everlong’ and ‘Times Like These’, The singer then invited his eldest daughter, Violet, onstage to perform the track.

Speaking to the audience before the performance Grohl said: “I remember her saying, ‘Dad, you’re not even the best singer in the family…And she’s right!”

Foo Fighters recently wrapped up their U.S. tour, and they’re heading to Europe in June. The band will return stateside in July, and that stint will last into October. Dave Grohl and co will be joined by the likes of Wolf Alice, The Kills, Slaves, Frank Carter & The Rattlesnakes, The Cribs and GOAT. The European tour dates with support acts are below.