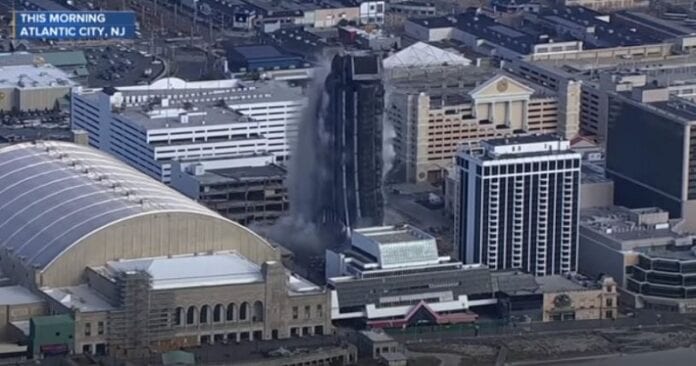 With Trump, it’s his casino that crumbled.

On Wednesday, the Trump Plaza Hotel and Casino was demolished with 3,000 sticks of dynamite. The building had fallen into complete disrepair and was beginning to crumble long before the demolition took place.

The building opened in 1984. The 80s was a successful decade for Trump. The hotel and casino hosted many parties which had A-listers, rock stars and athletes all enjoy its facilities.

However, after a string of bankruptcies, Donald Trump cut ties with the building in 2009.

The casino was performing poorly and by the time it closed its door in 2004, it was the worst performing casino in Atlantic City.

When Trump announced his run for The White House in 2015, he often cited Atlantic City as an example of his business acumen.

Atlantic City Marty Small told Associated Press (AP) “I got chills. This is a historic moment. It was exciting.”

A viewing party was organised. Many people paid $10 to watch the demolition from their cars and many more watched a livestream of the event online.

You can check out the demolition below.

Former events manager at the casino, Bernie Dillon recounted better days for the casino in an interview with AP.

“The way we put Trump Plaza and the city of Atlantic City on the map for the whole world was really incredible. Everyone from Hulk Hogan to Mick Jagger and Keith Richards, it was the whole gamut of personalities.”

“One night before a Tyson fight I stopped dead in my tracks and looked about four rows in as the place was filling up, and there were two guys leaning in close and having a private conversation: Jack Nicholson and Warren Beatty.”

Dillon added “It was like that a lot: You had Madonna and Sean Penn walking in, Barbra Streisand and Don Johnson, Muhammad Ali would be there, Oprah sitting with Donald ringside. I’m sorry to see it go.”

Donald Trump defeated Hillary Clinton in the 2016 Presidential election. She took to Twitter to express her pleasure at the demolition.

“Metaphor alert: next to the bankrupt Trump Plaza and Casino, just imploded this morning, remains the Atlantic City convention hall where LBJ accepted Democratic nomination in 1964 and touted the Great Society.”

Metaphor alert: next to the bankrupt Trump Plaza and Casino, just imploded this morning, remains the Atlantic City convention hall where LBJ accepted Democratic nomination in 1964 and touted the Great Society: pic.twitter.com/3Xoaj1Rdwe

Before leaving office, Donald Trump announced a garden of American heroes. Some of the inclusions were strange and you can read all about it here.