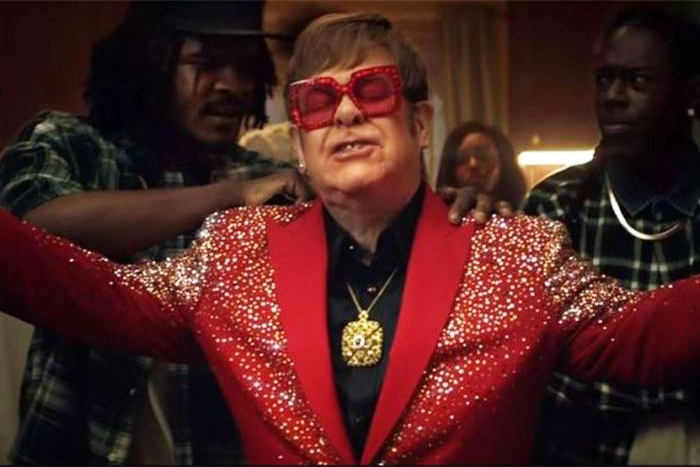 Elton John has competed in a rap battle for a new Snickers commercial in the states, with the legendary singer taking on the role of rising rap star Boogie’s “hungry” alter-ego. You can watch Elton unleash his rap skills below.

After Boogie’s go is announced in the battle, Elton John unexpectedly appears and sings a snippet of his famous 1976 duet with Kiki Dee, ‘Don’t Go Breaking My Heart’, received with much amusement by his fellow party-goers. A Snickers bar is then given to the singer , which allows John/Boogie transform back into his true self and the rap battle continues. Here’s the clip.

It’s reported by NME that Elton John took a hands-on role in casting the advert, and went over numerous auditions with the director Andreas Nilsson before agreeing on the rapper Boogie.

Nilsson has previously been involved in videos for the likes of MGMT and David Guetta. Rapper Boogie spoke to Variety about the commercial. “Working with Andreas was a blessing, this was in a way my acting debut and he made that transition so easy… Connecting with Elton John was also huge. His musical knowledge is crazy, he’s super in tune with current hip-hop.”

Dale Green, global director of the Snickers brand added,  “Elton holds the title of Billboard’s No. 1 male artist of all time, and is one of the most prolific and successful singer-songwriters of his generation. In pairing Elton and his 50-plus years of multi-genre hits with Boogie, a hip-hop artist on the brink of stardom in today’s most popular category, we can connect with our audiences over a shared love of music.”

It could be good to get Elton and the actor Laurence Tureaud aka Mr T, to perform a confectionary related rap off!