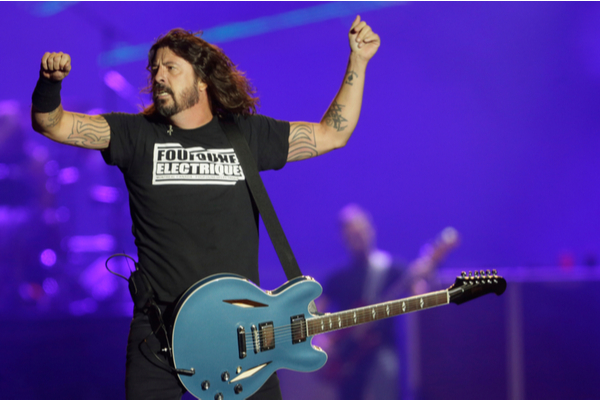 The band performed tracks such as “Learn To Fly”, “Everlong”, along with “Shame Shame” which featured on their album “Medicine At Midnight” released earlier this year.

The band were introduced by singer Billie Eilish who said that an “entire generation of music fans” had grown up with the Foo Fighters.

She also added that “they helped the world fall in love with rock and roll”.

“They put their heart into every single song, and leave it all on the stage every time. They’ve carried the torch of rock and roll for 26 years”, Eilish added.

“They have 12 Grammys, seven Platinum albums, two VMAs, and this year they’ll be inducted into the Rock and Roll Hall of Fame. They are heroes, they are legends, and now they’re officially Global Icons”.

Foo Fighters were picked for the new U.S Global Icon Award due to the band’s “unparalleled career and continued impact and influence has maintained a unique level of global success in music and beyond”, as the company said in a press release.

This award is also modeled after the annual MTV Europe Music Award for Global Icon.

Foo Fighters were also nominated for three other categories at this year’s VMAs. These were Best Choreography, Best Rock and Best Cinematography. These nominations were earned for their music video “Shame, Shame”.

Along with their singles, the band also performed “Charlie R.I.P”, a tribute to the late Rolling Stones drummer Charlie Watts. The song was written on Taylor Hawkins’ drum kit.

After the performance, Foo Fighters’ Dave Grohl also gave a short speech, accepting the U.S Global Icon Award. Check it out below.

We are thankful for these ICONS 🤘 Congrats @foofighters on taking home the Global Icon Award at the #VMAs! pic.twitter.com/kgQzRGKAFJ

“Thank you very much ladies and gentlemen for having us here tonight. It’s quite an award to receive”, Grohl said in his speech.

Last month, the band also confirmed a four night stadium run for the UK in the Summer of 2022. More on this report here.