It’s ten years to the day since Oasis split following a cancelled show in Paris and Liam Gallagher’s current single ‘One Of Us’ looks at the impact that their break-up has had in a song which explores issues of family, belonging and potential reconciliation.

Now on the tenth anniversary of Oasis’s split, Liam delves further into those themes with the track’s official video, which was written by Steven Knight and directed by Anthony Byrne – the latest project from the duo following the launch of the fifth season of ‘Peaky Blinders’ (Creator and Director of the show) this weekend.

Shot in a striking, stark monochrome ‘One Of Us: The Ballad of the Blue Eyed Boy’ finds Liam in contemplative mood as he looks back on a variety of photographs of the Gallagher family in happier times. The song’s poignant qualities are heightened by the video’s evocative symbolism, with the power of three being a recurring visual motif.

“It was a pleasure for me to venture into this new world of music video,” says Knight. “No matter what the form, storytelling is storytelling and I really responded to the story Liam wanted to tell.  It has become a creatively fruitful collaboration.”

Like ‘Shockwave’ before it, ‘One Of Us’ went straight to #1 on the Official Vinyl Single Chart. It’s available to order from https://store.liamgallagher.com/uk/.

This summer has seen Liam play select UK gigs, which have ranged from an intimate set at Round Chapel through to a biblical reaction at Glastonbury. Demand for tickets for his November tour have been huge, resulting in most shows already selling out as well as the addition of second nights in London and Dublin. Tickets for the 3Arena November 23rd date are still available from Ticketmaster. Please see https://liamgallagher.com/tour 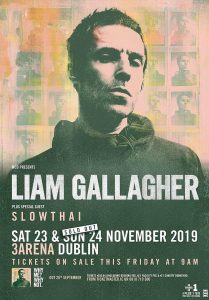