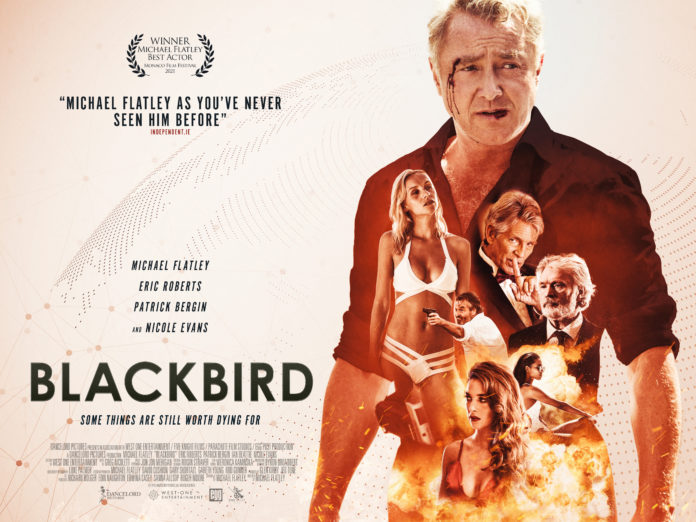 The official trailer and poster have been launched for the eagerly awaited spy-thriller BLACKBIRD which is set to be released in Irish cinemas on Friday September 2.

BLACKBIRD is the debut feature film from Michael Flatley (Lord of the Dance) in which he also stars as Victor Blackley, an ex-MI6 operative who is pulled back into the world he left when an agent connected to his past turns up to his place of business in Barbados.  The film had its world premiere at the Monaco Film Festival where Flatley picked up the Best Actor award for his role.

Speaking about the Irish theatrical release, Michael Flatley said: “I’m thrilled to be releasing Blackbird in cinemas across Ireland. The pandemic has brought about many unprecedented production delays, but we’re finally there. As well as filming on location in Barbados and the UK, we filmed many scenes in Ireland, so premiering here was always the first choice. There’s nothing more breath-taking than the Irish landscape.”

Special charity premiere screenings of the film will be announced closer to release date.

Speaking of his personal connection to the project, Michael continued: “I was surrounded on set by great talent in Eric Roberts, Ian Beattie, Patrick Bergin, Nicole Evans and Mary Louise Kelly.  Sinéad O’Connor who recorded the most beautiful track for the outro, is truly one of Ireland’s treasures. Thanks to all the cast and crew for their commitment to the project, and to all of our partners bringing the film to cinema audiences. We’ve all put a lot into this project, and for me it’s very personal. This was a new endeavour for me professionally and something I’ve always wanted to do. My mother, when she was alive, always encouraged me to pursue this dream. Sadly, she will never get to see it, but I know she is watching over me. I’ve had great support from the industry, especially in Ireland, and winning Best Actor at the Monaco Film Festival was very rewarding.”

BLACKBIRD was produced by Glen Kirby and Jed Tune (Off Piste, The Pugilist) for Dancelord Pictures and West One Entertainment and co-produced by Five Knight Films (Cardboard Gangsters) and Parachute Film Studios.

BLACKBIRD WILL BE RELEASED IN IRISH CINEMAS ON FRIDAY 2ND SEPTEMBER