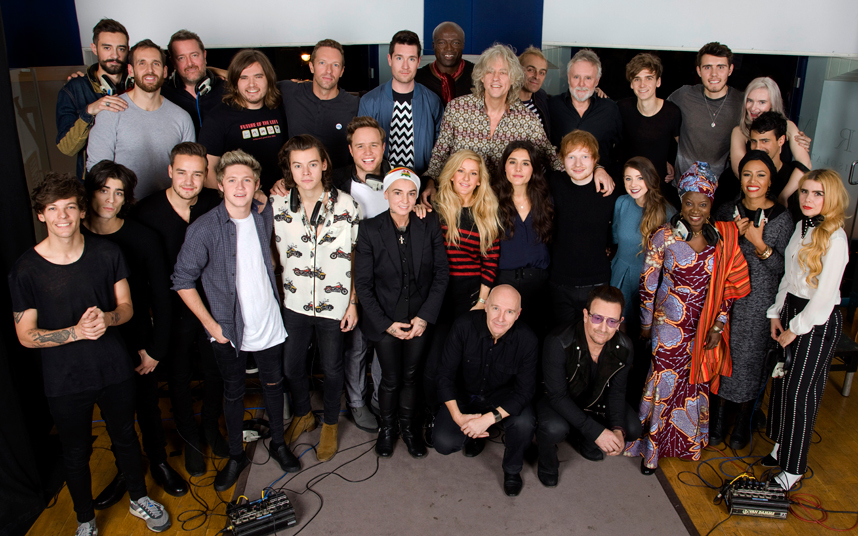 The official Band Aid 30 ‘Do They Know It’s Christmas? (2014)’ video premiered last night during an episode of the X Factor.

Bob Geldof spoke very passionately before the video was unveiled, urging people to purchase the new single. All the money raised from sales of the track will go towards the fight against Ebola in Africa.

Some of the lyrics from the original song are altered, such as the references to hunger, to reflect the new cause.

It’s Christmas time, and there’s no need to be afraid

At Christmas time, we let in light and banish shade

And in our world of plenty, we can spread a smile of joy

Throw your arms around the world

But say a prayer, pray for the other ones

At Christmas time, it’s hard but while you’re having fun

There’s a world outside your window, and it’s a world of dread and fear

Where a kiss of love can kill you, and there’s death in every tear

Well tonight we’re reaching out and touching you

No peace and joy this Christmas in West Africa

The only hope they’ll have is being alive

Where to comfort is to fear

Where to touch is to be scared

How can they know it’s Christmas time at all

Raise a glass to everyone

And here’s to them

And all their years to come

Let them know it’s Christmas time after all