Home Music Watch Paul McCartney Help A Loving Couple In His ‘Back in Brazil’... 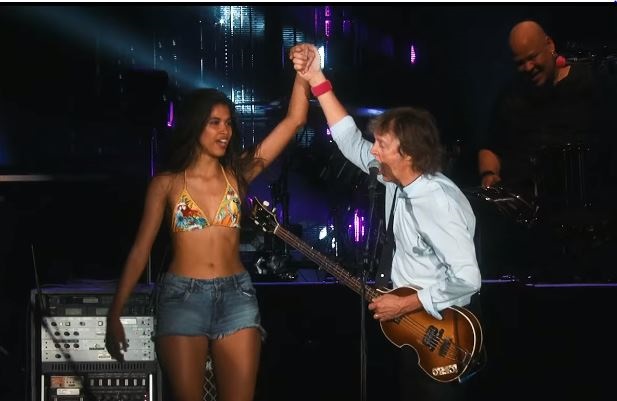 While Macca is enjoying his first number one album in over 36 years, the former Beatle has shared a new video from his ‘Egypt Station’ LP. In the new clip, a Paul McCartney concert saves a couple’s love in the singer’s video for “Back in Brazil.” It’s available below.

The video follows the song’s storyline which begins with a life-loving Brazilian woman walking on a beach. She dances with street performers and strolls through her city. She then sparks a conversation with a complete stranger and invites him to an upcoming McCartney concert.

The man then agrees to attend but is forced to work late, and has to leave her alone at the gig.  The woman holds up a sign for McCartney, and the singer calls her onstage to dance around during a song. The man returns to the venue after the set to apologize, but the overjoyed woman hugs him and says, “No, no. There’s no need to say sorry. I met Paul McCartney!”

“Back in Brazil,”  appears on McCartney’s recently issued 18th solo record, Egypt Station. The album marks his first Number One entry on the Billboard 200 since 1982’s Tug of War. According to Billboard, the record was released on September. 7th via MPL/Capitol Records and received a larger-than-expected 153,000 equivalent record units earned in the week ending Sept. 13. Of that figure 147,000 were in traditional album sales.

Watch Queen And Adam Lambert Kick Off Their European Tour In...