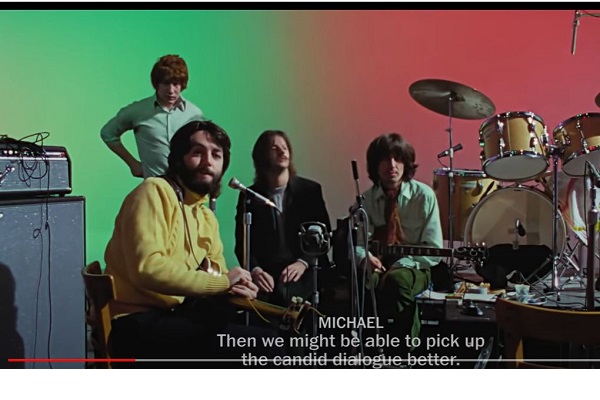 Following the airing of Peter Jackson’s The Beatles: Get Back, one thing that appeared to stand out to many viewers was a moment involving the one and only Paul McCartney. It appeared that the Beatles icon was able to craft “Get Back” in two minutes.

In this documentary, the cameras appear to show Paul McCartney playing his bass guitar, clearly looking for some kind of inpsiration.

The late George Harrison and Ringo Starr look on as McCartney works to create a new track.

Paul McCartney can also be heard singing to this music. It seems to be mostly vowel sounds uttered by him. This was gibberish, but they are used as a placeholder where lyrics could possibly go.

30 seconds in and suddenly an idea appears to start brewing. The vision begins to take further shape.

90 seconds in, the rest of the band begin to pick up on what he is doing. George Harrison begins to put together some guitar chords, while Ringo Starr starts working on his percussive concept.

After two minutes, “Get Back” has been created. This is very similar to that track which would ultimately become the chart topping hit of 1969.

Whether the song came together from that moment is still up for debate. However, one thing is guranteed is that this film caught a major portion of how the song was created.

The Beatles: Get Back was released last week, with the video of Paul McCartney working on “Get Back” becoming very popular on social media.

You can check this video out below.

I’ve never seen anything like this on film before. Paul really has nothing at the 30 second mark—but 45 seconds later he’s got the makings of a hit single. pic.twitter.com/kvGOp1yuZs

He added that there “so many moments in the whole documentary, in the whole making. We keep looking around the corner for the hobbits”.

The director Peter Jackson also revealed that Disney wanted to remove swearing from Get Back. However, this request was rejected by the surviving members of the Beatles Paul McCartney and Ringo Starr and Oliva, George Harrison’s wife.