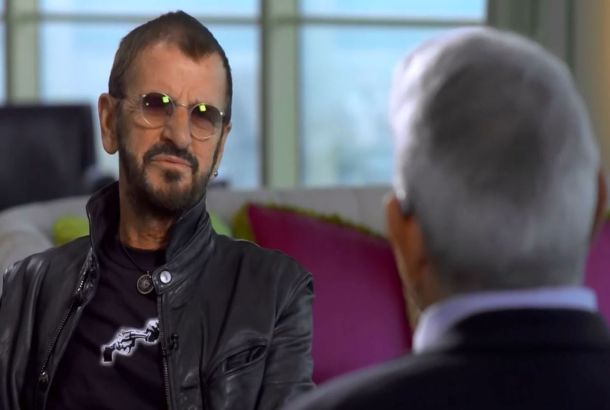 Since its launch in 2013, Willie Nelson, Robert Plant, Meat Loaf,  Neil Young, Roger Waters, Gene Simmons and Carlos Santana are among the stars who have all sat down and had a chat with Dan Rather for his TV show, The Big Interview With Dan Rather. Now it’s the turn of Liverpool legend, Ringo Starr.

According to Billboard, the Beatles drummer is set to appear on the 100th episode of Rather’s talk series this Oct 2nd. In the exclusive preview below, Starr makes a confession when he tells Rather that, growing up he didn’t pay attention to drummers. “I never listened to the drummer, I listened for the whole thing… I listened for the whole feel of the record.”

Starr has been touring with his All-Starr Band for quite a while now. Despite being the centrepiece to the act, he claims he’s happiest when he’s surrounded by other musicians. “I’m a band guy…I play with all these other guys,”  Starr admits. “When the band first started, I was so insecure, though I’d said yes, there were three drummers. I was in the middle, Jim Keltner, my hero from L.A., drummer, was on this side and Levon Helm was on this side and we were all boogieing away. Life is good.”

Starr also talks about the “risk” he took in leaving his former band The Hurricanes to join the lesser known Beatles. It obviously was the right choice for Starr to make!