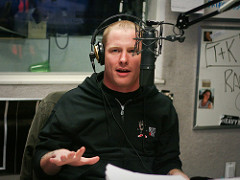 The frontman, who is a fan of the BBC show, has previously appeared on the show’s spin-off podcast ‘No Such Thing As A Fish’.

Taylor will appear on the show tonight, along with panelists Alan Davies, Aisling Bea, Ross Noble and the show’s new host, Sandi Toksvig. Ahead of the episode airing, a clip featuring the Slipknot frontman has been released online. You can watch it below:

Taylor’s appearance comes after he spoke to Scott Ian on ‘Never Meet Your Heroes’ about his battle with alcoholism, as well as his career with Slipknot. In the interview, Taylor said  “There was a huge war going on in my head, and that kind of fed the booze,”.

He continued, “That fed a lot of my issues with drinking and shit because I had given up drugs when I was a teenager so that wasn’t an issue for me, but the booze was really the anchor that I [ had].”

Taylor added, “I had bullshitted myself into thinking that I couldn’t go on stage without it like, ‘It’s good luck.’ Such addict bullshit.”