Liam Gallagher has shared his new version of the Oasis classic ‘Champagne Supernova’.

The track further builds anticipation for the June 12th release of his ‘MTV Unplugged’ album which is available to pre-order and pre-save now, including exclusive merch bundles and splatter vinyl.

To coincide with the launch Liam has announced an opportunity to join him and guitarist Bonehead on an exclusive Zoom chat, which will take place on Wednesday, June 17th at 6PM Dublin time.

Twenty winners will join the pair as they chat about the ‘MTV Unplugged’ album amongst other topics, and they will also answer some of your questions.

Friday June 12th
7pm (U.K. time)@liamgallagher will be our host for an extra special #TimsTwitterListeningParty featuring his @MTV Unplugged album.

Fans who buy any version of ‘MTV Unplugged’ or who register here will be entered into the competition. All pre-orders will receive instant downloads of ‘Sad Song’ and ‘Gone’.

In a a statement, Gallagher said,

“I was honoured to perform at the legendary showcase that is ‘MTV Unplugged’. It was a lovely experience and the people of Hull were biblical and sounded fantastic. I hope you enjoy the record. LG x”

The atmosphere of the ‘MTV Unplugged’ set is described in a press release as “palpable from the very beginning with a phenomenal reaction as Liam takes to the stage with ‘Wall of Glass’. Material from Liam’s solo career such as his personal favourite ‘Once’ and the joyous ‘Now That I’ve Found You’ resonates in this stripped-back format, with his vocal shining alongside a trio of backing singers and string arrangements performed by the 24-piece Urban Soul Orchestra.  Oasis guitarist Bonehead features on performances of ‘Some Might Say’, ‘Stand By Me’, ‘Cast No Shadow’ and ‘Sad Song”.

This MTV performance is in stark contrast to 1996. Back then, Liam had been scheduled to perform with Oasis for MTV Unplugged, but he barely attended rehearsals, and bowed out of the show at the last moment with what he said was a sore throat. It fell to Noel Gallagher to step-in as a the lead singer, while Liam nursed his sore throat with champagne and cigarettes, even heckling Noel from the crowd.

Liam recently announced that he’ll play a free concert for NHS staff at London’s The O2 on October 29th.

Click here for the latest updates on all future live shows and watch 27 minutes of MTV Unplugged for FREE right below! 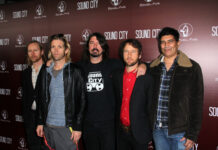 John Densmore Of The Doors