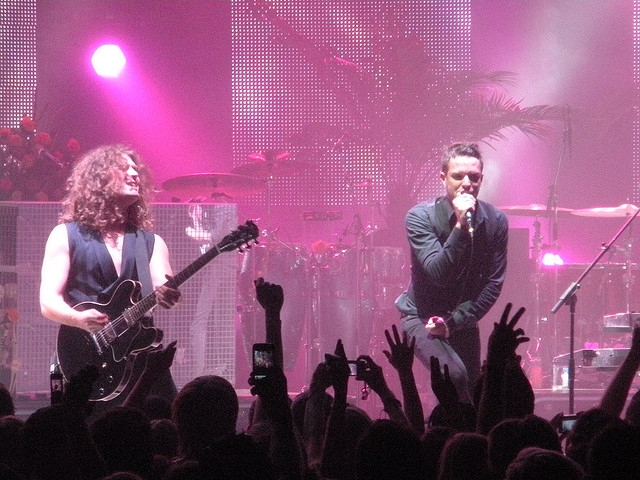 We all know someone who has asked the question ‘Did Jimi Hendrix just say, excuse me while i kiss the sky or kiss this guy?’.

There’s a lot of head scratching lyrics out there, blinkboxmusic.com has done a poll of the most baffling songs ever written. The survey of 2,000 people revealed that more than half of us mumble along to songs without knowing exactly what we’re singing.

A whopping 65 percent of music fans admitted they can’t follow the lyrics of modern pop hits. The Killers, The Beatles, Michael Jackson and Oasis are all culprits of puzzling verses.

The line that topped the list, ‘Are we human, or are we dancer?’ from The Killers, left 30 percent of people scratching their heads.

The Killers singer Brandon Flowers has explained that the chorus line was based on a quote “we’re raising a generation of dancers,” from writer Hunter S Thompson. “I took it and ran. I guess it bothers people that it’s not grammatically correct, but I think I’m allowed to do whatever I want,” Flowers said.

Also featured on the list was The Beatles’ 1967 song ‘I Am The Walrus’. It seems that 27 percent of people can’t make head nor tails of ‘I am the eggman, they are the eggman, I am the walrus, goo goo g’joob’.

The full top 10 most misunderstood song lyrics are:

1. The Killers – ‘Human’ “Are we human, or are we dancer?”
2. The Beatles – ‘I Am the Walrus’ “I am the eggman, they are the eggmen, I am the walrus, goo goo g’joob”
3. Michael Jackson – ‘Earth Song’ “What about elephants? Have we lost their trust?”
4. Lionel Richie – ‘All Night Long’ “Tom bo li de say de moi ya, yeah jambo jambo”
5. Carly Rae Jepsen – ‘Call Me Maybe’ “Before you came into my life, I missed you so bad”
6. Black Eyed Peas – ‘Boom Boom Pow’ “Beats so big I’m stepping on leprechauns”
7. Duran Duran – ‘The Reflex’ “The reflex is an only child, he’s waiting in the park”
8. Wham! – ‘Club Tropicana’ “Club Tropicana, drinks are free, fun and sunshine, there’s enough for everyone, all that’s missing is the sea”
9. Taylor Swift – ‘Love Story’ “Cause you were Romeo, I was a scarlet letter, and my daddy said stay away from Juliet”
10. Oasis – ‘Champagne Supernova’ “Slowly walking down the hall, faster than a cannonball”

‘Scream Above The Sounds’ Will Be The New Record From Stereophonics