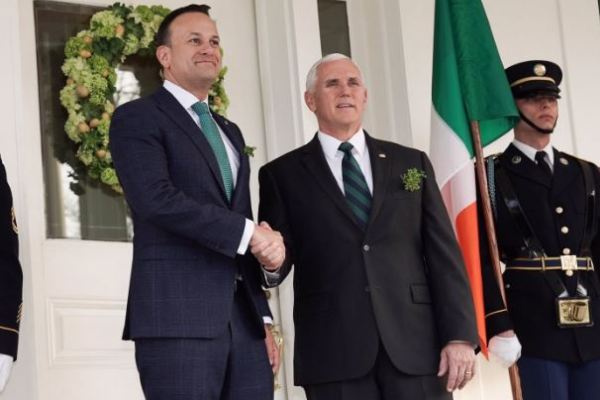 The White House says US Vice President Mike Pence’s lunch with Taoiseach Leo Varadkar and his partner today shows that he is not “anti-gay.”

Mike Pence and his wife Karen joined Mr. Varadkar and his partner Matthew Barrett for lunch at Farmleigh House.

The veep met President Michael D Higgins at 11 o’clock this morning before attending a family lunch at Farmleigh.

He has face criticism in the past over his views on abortion and LGBTQ rights; however, White House Deputy Press Secretary Judd Deer said the meeting proves he is not “anti-gay.”

The US vice president arrived at Shannon Airport yesterday afternoon where he held a brief meeting with the Tánaiste.

He told Simon Coveney that he values the Good Friday Agreement and the involvement of the US in securing it. He said it must be protected when the UK leaves the EU. Speaking yesterday, the Taoiseach Leo Varadkar said Vice President Pence is a “real friend of Ireland” – adding that he would use the meeting to “spell out” the threat posed to the island by Brexit.

“As you know the US administration is quite well-disposed toward Brexit and you have heard what President Trump has said about that.

“I am going to use the opportunity tomorrow just to spell out to him and explain to him a little bit better what the consequences might be for Ireland in the hope that message will go back to the administration.”

Meanwhile, protesters will dance outside the Dáil this afternoon to protest the American’s arrival. Organised by Amnesty International, the ‘Disco at the Dáil’ demonstration called is taking place at 1pm.