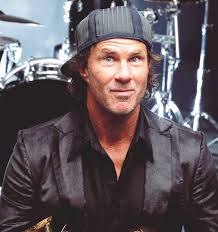 Last week Ferrell made light of the uncanny similarity in looks between him and Smith while hosting a Reddit Ask Me Anything, which led to the Red Hot Chili Peppers member challenging him to a musical duel. Ferrell did not reply immediately but has now accepted the offer, on the provision that they raise money for a cancer charity.

Ferrell’s reply came during another AMA, this time hosted by Smith. The comedy actor participated and wrote:

“Hi, Chad. Will Ferrell here. I saw your video and I graciously accept your invitation to a drum battle. If we can raise $300,000  for Cancer For College I will face off with you in the greatest drum vs. cowbell showdown the world has ever seen. We can do it on stage at a Red Hot Chili Peppers concert or in front of a mutually convenient public library. Your call. Also, would you rather fight a hundred duck sized ducks or one horse sized horse?”

Not to be out done, Smith also did some trash talking in the direction Ferrell writing:

“I have to comment that I think Mr. Ferrell is a delusional imposter. It seems to me that he has gone off his meds and he needs to seek professional help because I am obviously more talented and handsome than he is. You know, his cowbell work is well-documented, but his drumset skills are nominal based on Step Brothers the film. Other than wiping his testicles on the drums, which of course I give high marks to.”

Could have the making of a very amusing spectacle. Stay with Nova for updates on this story.