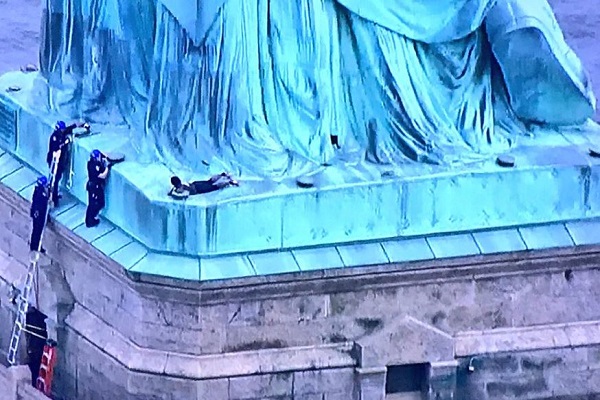 U.S. Magistrate Judge Gabriel Gorenstein seems to take his job very seriously. His curiosity regarding a crime he’s ruling over appears to have gotten the better of the court judge.

Gorenstein is dealing with the case of Therese Okoumou, who illegally climbed the Statue of Liberty on July 4, 2018. That was in protest over the imprisonment of children by Immigration and Customs Enforcement at the border (ICE).

Mashable, reports that Gorenstein intends to climb the statue as well to get a better understanding of the risks associated with the illegal activity.

NBC New York asserts that Gorenstein wishes “to better appreciate the risks or hazards created by the defendant’s conduct.” He lodged a court order asking for a ladder and to gain entry to the area where Okoumou was found.

Okoumou scaled the Statue last Independence Day, 4th of July, following an Abolish ICE protest. Then a U.S. Attorney ruled the climbing to be “dangerous and reckless” rather than a constitutionally permitted peaceable protest.

Ms. Okoumou stated In a December 2018 hearing that she was deeply moved by the images of children imprisoned at the border.

Okoumou’s trial is set for March 5th, which gives Gorenstein some time to have his request order approved. ICE and its discontinuation are anticipated to be very important issues in the run-up to the 2020 election.

A YOUNG BLACK WOMAN HAS CLIMBED UP PART OF THE STATUE OF LIBERTY BASE TO PROTEST THE ‘ICE’ ILLEGAL KIDNAPPING OF CHILDREN AND ASSAULT OF FAMILIES AND AMERICAN FREEDOM! pic.twitter.com/GO2RGXikMn