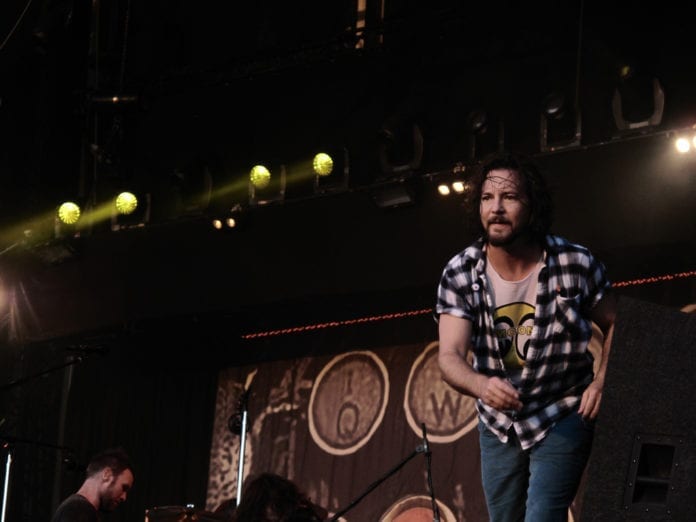 Way back in 1992, Pearl Jam performed a gig in the Dutch city of Utrecht. Following the show, Eddie Vedder spent some time chatting with a Dutch woman.

The woman gave the frontman a ride back to his hotel on her bicycle. They never saw each other again, but Vedder never forgot her. Just a couple of nights ago, the pair reunited!

According to the NL Times, Vedder was performing two solo concerts in Amsterdam over the weekend. On the Sunday after the gig, he asked the crowd if that young woman was in the audience?

Vedder said to the crowd: “Is the woman who gave me a lift to my hotel in 1992 maybe here tonight?… I am almost certain that I would still recognize her face.”

Alas, the woman question was nowhere to be seen. However, Dutch newspaper Het Parool took on the quest and they located the woman.  Her name is Valeska Custers, and she told a very romantic tale of their encounter.

After the gig Custers went backstage to hang out with her City Pig Unit friends, and Vedder got talking to her: “He was extremely shy, but I really felt a connection with him.”

After Custers helped City Pig Unit pack up their gear, she met up with Vedder in a café. The two of them talked until 3 am. When Vedder became tired, she brought him to his hotel on the back of her bike.

Vedder carried her backpack, which had her brother’s flannel shirt and the frontman forgot to give the backpack back to her as he went into his hotel.

“I still remember thinking: I’m not going to give myself to him. He’ll be somewhere else tomorrow and I’ll be one of the thousands of girls… He feels a bit like my soulmate.” She tried to meet him at a few other Pearl Jam shows over the years, but it never happened.”

However, a member in Vedder’s backing band gave him the Het Parool article, and the singer’s tour manager invited Custers to the solo show that frontman played on Wednesday night in Brussels.

Het Parool reports that after the gig, they were finally reunited and  Vedder reportedly said to Custers, “You still have the same smile.” They talked about their partners and their children.

Vedder recalled how Custers offered to call him a cab: “But I didn’t have any money on me!”

He also wanted to give back that flannel shirt: “I made you write down your address in order to do so. I’m not sure if I still have it now, but I kept it for years at least.” Custers replied: “He says you can keep it.”

Elton John Memoir To Be ‘One Heluva Roller Coaster Ride’