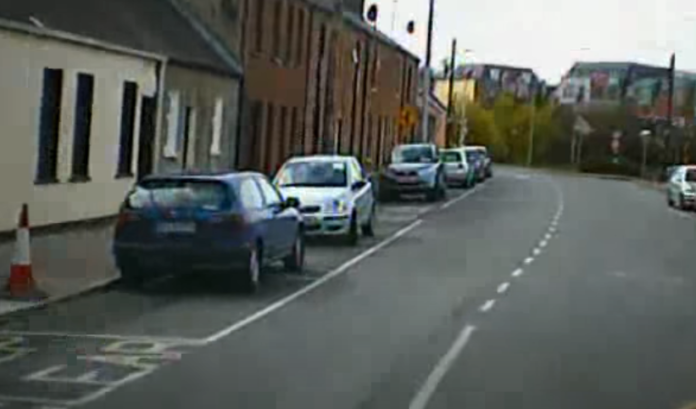 Emma Hanrahan, a young mother described how she bravely confronted three teenagers who attacked her with a knife in a Dublin car park. While attacking her, the teens were “laughing” in her face, as they sliced her leg with a blade.

Last Friday evening, Ms Hanrahan was struck from behind, whilst walking through the GAA car park in Balbriggan.

She managed to deflect the knife away from her face and neck. She punched and kicked the teens until they eventually fled.

The 30 year old who does voluntary work in the community, said, “I had my earphones in so I didn’t hear them coming until I got a thump to the back of my head and was pushed face down to the ground”.

“I saw feet and then felt pain in my leg where they cut me. I just started punching and kicking as hard as I could and I managed to knock one to the ground” she added.

Emma also explained that she managed to get her “hands up in time” to defend herself from her attackers.

“I saw the weapon, which I reckon was a knife, coming at my face and neck but thankfully, I managed to get my hands up in time and the thickness of my jacket sleeve took the cuts”.

Emma also said that this incident has shaken her “to the core”. She also said she will not go walking alone again, following this traumatic ordeal.

“I won’t be going out for a walk on my own ever again. I grew up in a rough area of Dublin and I’m a tough cookie but this has really shaken me to the core”.

She also said, “When you are in that situation, it’s true what they say, your life really does flash before your eyes.

She commented further that “all I could see were my daughters and my partner Rob”.

Emma Hanrahan said that the three teens were around 17 or 18 years old. She added that they were “laughing all the time”, as she was defending herself.

Emma said, “They were just laughing all the time. When I kicked one of them to the ground, the other said ‘run blood’ or some kind of gang slang to them. They were only kids. Maybe 17 or 18-years-old or even younger and were covered up well”.

She added, “I don’t think they wanted to rob me because I had my phone, €20 and cigarettes in my pockets. But, they didn’t even look for anything”.

Emma Hanrahan also expressed her gratitude for an elderly man, who found her and phoned for help.

She explained, “I just got up and ran and stumbled to try and get to safety. Adding, “an elderly man came to see if I was OK. He had heard screams and had rang the gardaí who arrived within about five minutes”.

Gardaí are investigating the incident and issued the following statement.

“A woman was approached from behind by three male youths, who pushed her to the ground. The woman received injuries from the incident. These have not been reported as serious”. No arrests have been made. Investigations ongoing and anyone with any further information can contact Balbriggan Garda station at 01 8020510.”

LISTEN: Living in Lockdown. Latest on Covid 19 In Italy