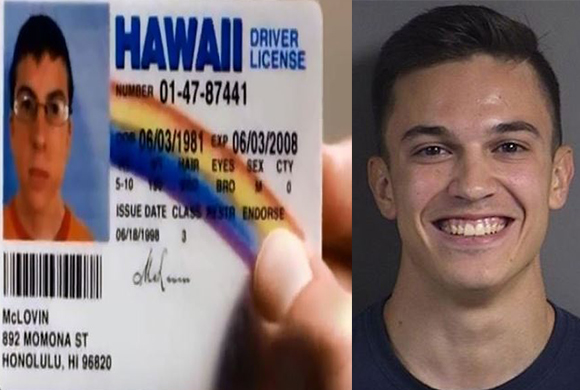 Seth Rogen has reacted after an underage drinker was apprehended by authourities with a McLovin fake ID. The particular bogus ID which was made famous by the film Superbad.

A 20-year-old was discovered in a bar last Friday in Iowa. In that particular state, the legal drinking age is 21.

Daniel Alfredo Burleson was arrested after an officer noticed him with a drink in his hand.

The young drinker was carrying a fake Hawaii ID bearing the name “McLovin” and a June 3rd, 1981 date of birth.

Rogen who produced co-wrote and acted in the cult film. took to Twitter to simply say: “My work here is done.”

After being questioned by authorities, Burleson admitted that the drink contained vodka and refused to show his ID. Police say he was brought outside of the bar and when he revealed his real ID, it confirmed he was under the age of 21.

According to the NME, when police then looked at his fake ID, they soon realised it was a copy of the film’s iconic prop.

That was a Hawaii ID with the name ‘McLovin DOB 06/03/1981.” Burleson claimed that he purchased the ID from Amazon!

Superbad has maintained a cult following with fans celebrating the 10th anniversary back in 2017.