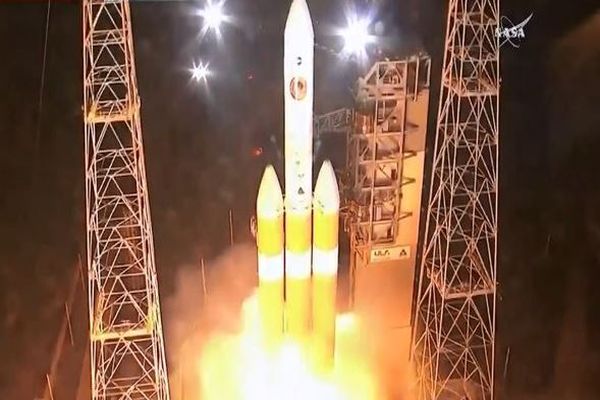 The NASA Parker Solar Probe has lifted off from Florida’s Cape Canaveral air base on a seven-year mission to observe the Sun’s outer atmosphere. The spacecraft roughly the size of a car was launched onboard NASA‘s Delta IV Heavy rocket at 8:31 am UK time (3:31am EDT). The €1.9 ($1.5bn) probe will be the fastest-moving manmade object in history, as it reaches speeds of 430,000mph as it travels around the Sun.

NASA described the mission to ‘touch the Sun’ will assist scientists to unlock the solar system’s greatest secrets. Thousands gathered at the Cape Canaveral Air Force to watch the Parker Solar Probe take off this morning. NASA tweeted,  “3-2-1… and we have lift-off of Parker Solar Probe atop the Delta IV Heavy rocket.” as the rocket launched into the sky.

We have confirmation that the #ParkerSolarProbe solar panels have been deployed. pic.twitter.com/c0n2FfaVKH

NASA’s mission will study the Sun’s super hot outer atmosphere, which is known as the corona, from approximately 3.83 million miles away.

.@FastCompany names @JHUAPL one of the most innovative companies in space for building a heat shield. By which we mean a really, really, really major-league heat shield, designed to withstand 2,600-degree heat in the sun’s corona. https://t.co/UO5IcpuDFn @ParkerSunProbe pic.twitter.com/K7wKYCfpEt

UK scientist Dr Nicky Fox described the details of the mission, “The Parker Solar Probe is going seven times closer than anything has ever been before.  We’re actually going to be within four million miles of the surface of the Sun. I realise that doesn’t sound very close but if you put the Earth and the Sun one metre apart, Parker Solar Probe would be 4cm from the Sun.”

The mission has been on Nasa’s wishlist since 1958 but it’s only now that technology has finally allowed their dreams to come true. Parker Solar Probe will use Venus to adjust its course which is anticipated to complete 24 orbits of the Sun. NASA project manager Andy Driesman said,  “We will fly by Venus seven times throughout the mission. Each time we fly by, we get closer and closer to the Sun.”

Lift off! Nasa launches the Parker Solar Probe on its mission to ‘touch’ the Sun https://t.co/dPxdBaG0Ic pic.twitter.com/2Oo5TGLNFw

The Parker probe is is the namesake of US astrophysicist Eugene Parker, who raised a groundbreaking theory on the supersonic solar wind in 1958. The 91-year-old spoke to NASA TV after the launch, “It’s a whole new phase and it’s going to be fascinating throughout.I’m anticipating that the results will turn up basic information about why the corona of the Sun is at one million degrees.

“I’m just waiting for the data. All I can say is, ‘Wow, here we go.’ We’re in for some learning over the next seven years. The spacecraft will zip past Venus in October, setting up the first solar encounter in November.”