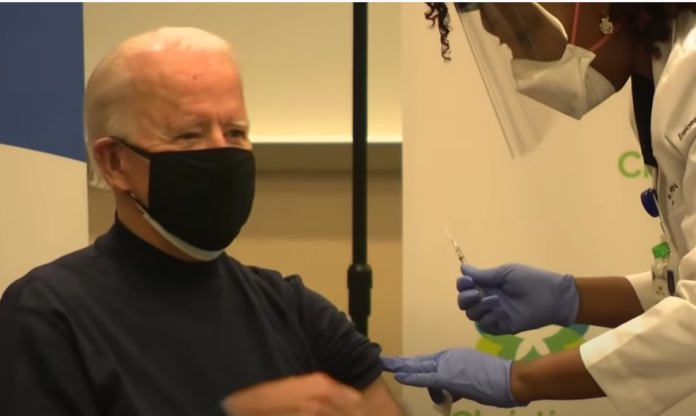 Joe Biden along with his wife Jill got the Pfizer Vaccine live on television. See here.

Eight million vaccines are set to be given out around America this week.

The Bidens received the jab at ChristianaCare Wilmington Hospital near his home in Delaware on Monday. Donald Trump’s Warp Speed initiative is set to deliver millions of doses of the vaccine.

This Pfizer vaccine will need to be administered twice. Each jab will be a few weeks apart for it to reach its 95% efficacy.

Before the nurses administered the vaccine to him, Biden said, “The administration deserves some credit getting this off the ground”.

Biden added, “I’m doing this to demonstrate that people should be prepared when it’s available to take the vaccine”.

Jen Psaki, Biden’s transition spokesperson stated that Vice President-elect Kamala Harris and her husband Doug Emhoff would be getting the jab next week.

Psaki already explained that the timeline was in the interest of national security if Biden and Harris were to experience side effects.

News that Biden would be getting the Pfizer vaccine emerged last week.

“I don’t want to get ahead of the line, but I want to make sure we demonstrate to the American people that it is safe to take”, Biden said.

Trump has been reportedly advised not to get the Pfizer vaccine just yet.

This is because he received an experimental monoclonal antibody treatment when he tested positive for the virus in October.

The Centers for Disease Control and Prevention (CDC) advise anybody not to be vaccinated for at least 90 days after receiving the treatment.

A White House Spokesperson, Brian Morgenstern said, “When the time is right, I’m sure he will remain willing to take it. It’s just something we’re working through”.

Joe Biden has already promised to have 100 million vaccinations distributed to Americans, in his first 100 days as President. He is due to take office on 20 January.

Final Trial Pfizer Vaccine Proves To Be 95% Effective Against Covid