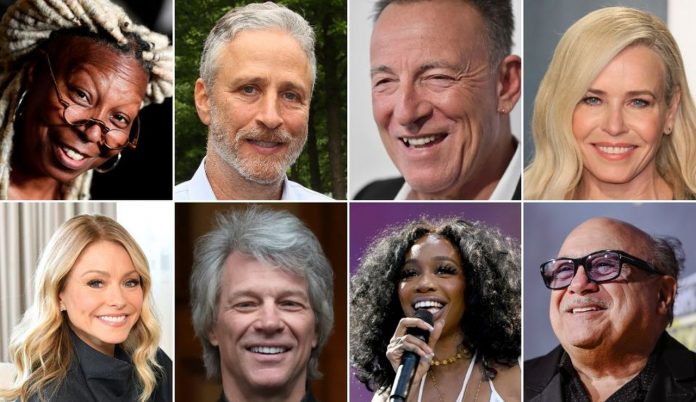 This special evening will be broadcast at Midnight on Wednesday, April 22, (Dublin time going into Thursday morning) on Apple Music and AppleTV apps, worldwide.

Bruce Springsteen announced that he is teaming up with other New Jersey native celebrities for a #JerseyForJersey event that will raise money for the NJ pandemic relief fund. Tune in April 22nd on @ABCNetwork! pic.twitter.com/kgOKiqL15y

“New Jersey is on the front lines of this pandemic, making it more important than ever for us to do what Jersey does best – take care of one another,” said New Jersey First Lady Tammy Murphy. “That’s why we’re asking everyone in our state to join the NJPRF and some of New Jersey’s finest for some much-needed musical entertainment, levity and Jersey Pride during these unprecedented times.”

Besides raising funds for NJPRF.org, JERSEY 4 JERSEY will honor those on New Jersey’s front lines, including healthcare workers, first responders and other essential employees. The event also will remind all those tuning in about how they can help stop the spread.

JERSEY 4 JERSEY will be produced by Joel Gallen, who recently produced the iHeart Living Room Concert Benefit for Fox, in addition to numerous other fundraising television events including the award-winning telethon that immediately followed September 11.

Additionally, the event will benefit from the talents of Irving Azoff, Jon Landau and Joel Peresman. Azoff, who manages Bon Jovi, and Landau, who manages Springsteen, are two of the top managers in the music business. Peresman is president and CEO of the Rock and Roll Hall of Fame Foundation.