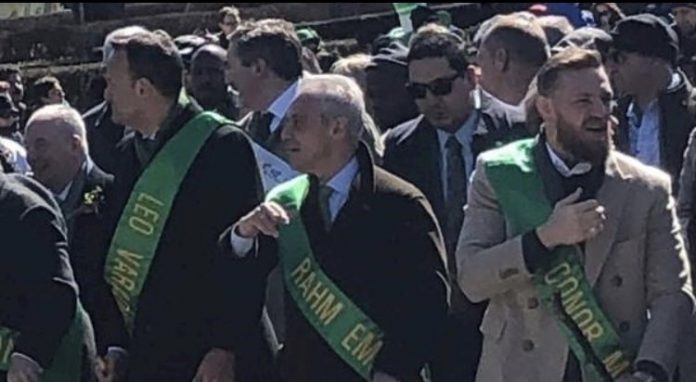 Taoiseach Leo Varadkar has marched in the St Patrick’s Day’s parade in Chicago.

He’s also taken a boat trip down the Chicago river to witness the traditional greening of the city’s river and to launch a new book from Tourism Ireland on the success of its global greening campaign.

Also marching in the parade alongside the Taoiseach was MMA fighter Conor McGregor.

Leo Varadkar says he wasn’t aware that Conor McGregor would be joining him!

There is now an investigation to find out how Leo Varadkar managed to slip in beside Conor McGregor at the front of the Chicago St Patrick’s day parade & try piggyback on McGregor’s high profile. Some people do anything to be in the spotlight 🤣 #StPatricksDayParade #McGregor pic.twitter.com/gZrxFn44VB

According to The Independent, Mr Varadkar was questioned as to whether it was appropriate that Conor McGregor was representing Ireland considering his conviction for disorderly conduct.

“I don’t think he was representing the country, that’s kind of what I was doing and Mr Ring.”