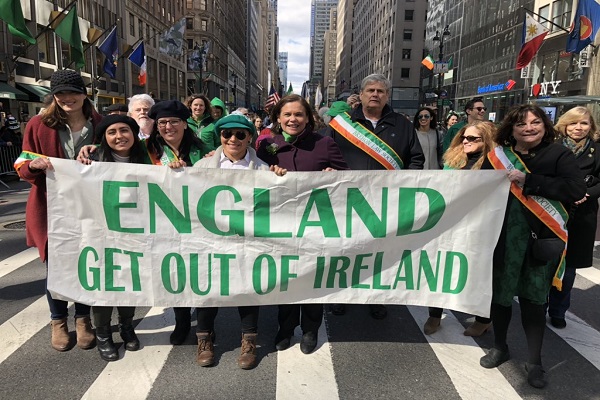 The Sinn Fein leader , Mary Lou McDonald has been criticised for a picture taken during her attendance at the St Patrick’s Day festivities in New York.

Ms McDonald marched alongside councillors in the states as they carried banners – one of which has caused quite the consternation back home.

The party tweeted the picture of the leader holding the sign that said “England get out of Ireland”.

According to Dublin Live, Mr Mohan blasted  McDonald saying “this sort of nonsense jeopardises that very peace” and that it won’t “bring a United Ireland any closer.”

“As Chair of Fianna Fail Dublin Central and a candidate in the North Inner City for the Local Elections I find this picture of Mary Lou McDonald disgraceful. This sort of tripe does nothing to bring a government in the North any closer, nor does it bring a United Ireland any closer.”

Too Late For Peter Casey To Pull Out Of Presidential Race