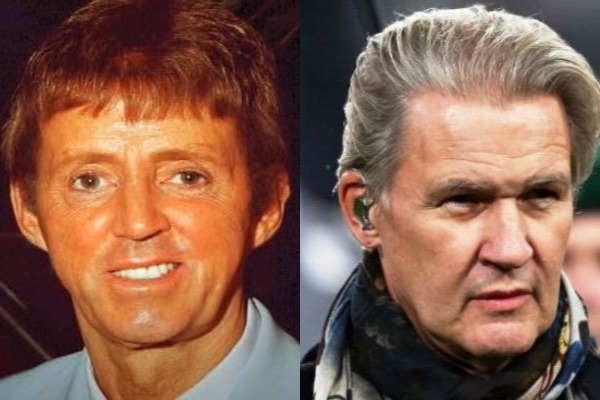 The venerable old crooner Dickie Rock has been left aghast by comments made by Johnny Logan in an Irish Times weekend interview, so much so that he has threatened to give Johnny ‘a f***ing box’.

Dickie has addressed the comments made by the multiple Eurovision winner who accused the Cabra born singer of living in a ‘fantasy word’ in what is a very unlikely celebrity feud.

Johnny was asked about maintaining a strong personal family life in these difficult time and as a segueway in the Irish Times piece there was a contrast with Dickie Rock and his apparent personal relationship trouble to which Logan responded defensively ….‘What would Dickie Rock know about being a musician?’ he asked.

“My life was a lot different from Dickie’s, Dickie’s idea of an international tour was to have a gig in England. He bought a pub in Spain so he could gig there. That’s the reality of it. We know Dickie in Ireland but go out of here and say ‘Dickie Rock’ and people will think you are talking about some kind of stone you’d find in a museum.

“I love Dickie but he’s a legend in his own head . . . he lives in a fantasy world. You know, I’ve sang for Pope John Paul, for the queen of England, for Prince Charles, for Lady Diana – when she was alive – for the government of Ireland, for every head of state in Europe . . . I toured with the Royal Symphony Orchestra. I’ve done the London Palladium, about 20 times, Top of the Pops about 14 times. Get Dickie to match one of those, you know? I’m still touring. And I’m busier now than ever.”

He rounded off the interview with Roisin Ingle by expressing tongue-in-cheek a desire “To keep my hair. And to outlive Dickie Rock.”

The man who famously sang the old favourite Candy Store to his many fans “I can’t understand it because I always got on very well with Johnny Logan. There have been no incidents.

“Johnny seems to be blowing off his own achievements an awful lot. Johnny must be very insecure. His career is mostly abroad and he is very successful at it.

“I’m happy that Irish people know me. I am happy to be at home and not to have to go away to pursue success.”

“Perhaps Johnny is unhappy deep in his heart? He had the looks. He had the height. He was a good-looking lad.

“I’ve said to my wife Judy, if Johnny Logan hadn’t been born in such a small country, if he’d been born in America, he would have been another Elvis.” Dickie added: “There’s no doubt, he has a great voice and great personality”.

Dickie Rock told the Irish Sun also that he and his wife are cocooning and feeling fine. He exercises at home and that his family bring groceries to their home in Donnybrook.

Now Everyone Can Be A Hero Too