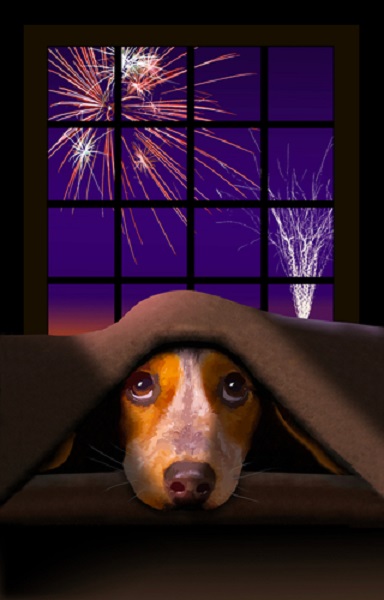 The use of fireworks in residential neighbourhoods has increased over the past few months due to upcoming mischievous night, Halloween. As a result of loud bangs and other noises, an Irish Guide Dog has suffered a “mental breakdown.”

Irish Guide Dogs for the Blind make an appeal to the public to be mindful of the impact of fireworks. They have a major impact on working dogs and their owners. In the appeal they say illegal fireworks are having a devastating impact on Guide and Assistance Dogs nationwide.

“I’m devastated as I don’t know if she will be able to work again due to post-traumatic stress. She is terrified and is unable to leave our house. I’ve lost my Guide Dog until at least Halloween.”

Despite the uncertainty surrounding the Sage’s condition, Ulla is optimistic that she will eventually get back to her old self.

“Sage is now staying with a dog behaviourist who is working to desensitise her to fireworks. Hopefully, she can get her over this and get back working again.”

Irish Guide Dogs for the Blind general manager Tim O’Mahony explains that it is no easy process, especially for Dogs. He makes the point that most people are aware fireworks can be upsetting to animals but particularly working dogs.

“Most dogs will cope with a degree of stress in their lives,” he said. “Sometimes however, a dog has an experience that goes beyond that, such as a firework exploding too close to it.”

He said that this sensitises the dog to a disproportionate degree, like PTSD in humans. Thereafter, they are unable to cope with even a normal amount of the stress experience.

“They may recover after the firework season to varying degrees but are now in a state whereby over-reaction to unexpected noise has created a fear reaction.

Although he thinks they may recover after the firework season, he believes over-reaction to unexpected noise has created fear reaction.

“Even if that noise is far away. The dog’s ability to cope is now critical. In some cases, it can end a dog’s working life leaving their owner without a dog. [This] means they lose their independence and mobility.”

Some tips by the Irish Guide Dogs for the Blind:

The Irish Guide Dogs for the Blind group have made some tips to help protect your dog this Halloween. Here are just some of them.

Any Women Flying With Aer Lingus Today? You’ll Love This…