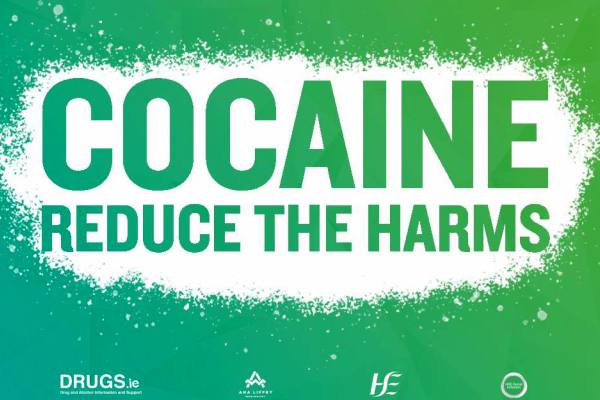 Ireland ranks fourth highest for cocaine use among young adults in Europe, while the drug is more available and purer than ever.

The Health Service Executive says it’s safest NOT to take drugs, but it’s offering hard-hitting advice to those who do.

A new campaign has been developed by the Ana Liffey Drug Project and the HSE to raise awareness about the dangers of cocaine, and the harm associated with snorting, smoking or injecting cocaine.

Cocaine is more available and at its highest purity in Europe today than it has been in a decade. It is the most commonly used illicit stimulant drug in Europe.

If you decide to use cocaine, remember:

If you decide to use crack, remember:

Almost all deaths (93%) where cocaine was implicated involved other drugs in 2015. Cocaine and alcohol combine in the body to produce cocaethylene, which increases the risk of organ damage.

It also increases the risk of epilepsy, suicide, violence, accidents and sudden death.

“This is a very important campaign, focusing on providing information and raising awareness about cocaine among drug users and health professionals.

Recent figures which show an increase in those seeking treatment for cocaine use is of real concern. This evidence supports what we are hearing from some services on the ground that cocaine use, and in particular crack cocaine use, is on the rise. I therefore welcome this new campaign which I believe will play a vital role in communicating the risks and dangers of cocaine use to dependent users and at risk groups, as well as to those who engage in recreational use.

Through our national drugs strategy, ‘Reducing Harm, Supporting Recovery’, we are working to strengthen early harm reduction responses to current and emerging trends and patterns of drug use, which would benefit people who use drugs, their families and the community.”

Florence + The Machine To Return To Ireland Next Summer

The Leaving Cert Results: Marks Drop Across English And Irish